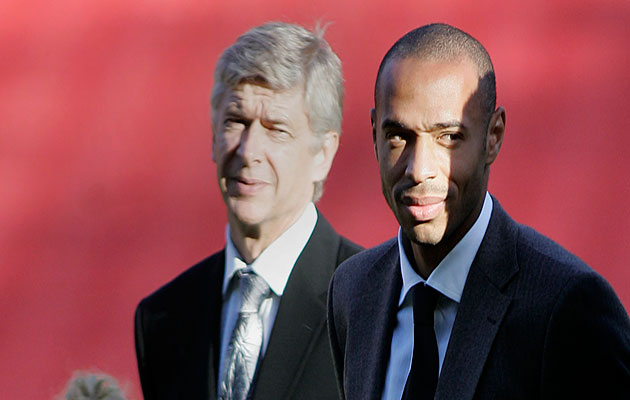 Henry wrote in his column in the Sun newspaper that he had “never heard the Arsenal supporters as angry as they were at the Emirates on Wednesday night”, following Arsenal’s 2-1 loss to Swansea City.

When Wenger was asked about the comments at his weekly press conference on Friday, he suggested that Henry was hardly a reliable barometer when it came to gauging the mood of the typical Arsenal fan as he games from the sanctuary of an executive box.

“Thierry Henry has his opinions,” he said. “He has not found the measurement of the fans angriness of 60,000 people straight away because he sits in the best seats in the stadium”. When he is not working, Henry watches Arsenal from an executive box.

“The fans will be behind us, I don’t worry for that,” Wenger added, ahead of Saturday’s clash against local rivals Tottenham.

“This is one game where fans are always behind us, and it is down to us to give them more belief and make them more vocal. Confidence has been a bit jaded. Always in football, we do 98 per cent of things right and need to find two per cent. That’s down to our collective qualities and putting more effort in.”

Unusually, for this most fiercely contested of derby matches, there is more than just local pride at stake. Arsenal are currently in third place in the table, six points behind leaders Leicester City and three behind Spurs. Defeat for either side could prove fatal to their title ambitions.

“This is maybe one of the few where the title race is at stake, maybe the only one since I am here,” said Wenger.

Wenger, who will travel to White Hart Lane without the injured Petr Cech and Laurent Koscielny, was also keen to play down the suggestion made by Alexis Sanchez that the team lacked the self-belief to win the title.

“You have to take these comments a bit into perspective,” said Wenger. “Belief comes with the last results you have made”.