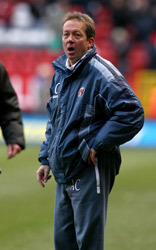 The former Charlton manager will fill the vacancy created by the sacking of Alan Pardew on Monday.

Curbishley, who played for West Ham from 1975-79, admitted yesterday that he would relish the prospect of returning to Upton Park.

Curbishley is thought to have turned down the opportunity to manage the east London club in 2001 when he was still at Charlton. He resigned his Charlton role in May explaining that he neeed a break from the game after 15 years in charge at the Valley.

It is also understood Curbishley will be joined at Upton Park by his former Charlton assistants Mervyn Day and Keith Peacock, who is already on West Ham’s staff.

On Tuesday, Curbishley said: “I would love to know what West Ham want to say, of course I’m interested. They are my club.”

“I’m flattered by the response from fans who believe I should be the next boss but two and two do not always make four.

“West Ham are my club. I come from Canning Town, grew up as a trainee, became a first-team regular and sat at the feet of the incomparable Bobby Moore.

“The England captain would often give me a lift into training and I’ve never forgotten the lessons he taught me on and off the pitch, especially how to conduct myself in public.

“Once you are brought up in a background like West Ham, the affection you have for the club never goes away.

“I can easily tap into the fans’ passion for the club, what they want and what they stand for.”

“I think this is very cruel for Pardew as he’s done remarkably well there,” he told BBC Radio Five Live

“He wasn’t given time by the new owners but sometimes that’s the risk in our job, you undeservedly get the sack even if it’s not linked with your quality.”