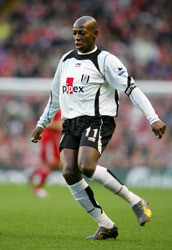 Will Spurs who are having an in and out season be able to beat Cardiff in the FA Cup on Sunday? Click here to find out the latest odds!

West Ham have signed Fulham captain Luis Boa Morte for fee reported to be about £5m.

The 29-year-old Portugal striker becomes Alan Curbishley’s first signing since arriving at West Ham last month as he looks to rebuild his team for what promises to be a season-long battle against relegation.

The Portuguese international passed a medical and agreed personal terms at West Ham on Thursday.

“West Ham is a massive club and I wouldn’t have signed if I didn’t think we could avoid relegation,” he told West Ham’s web site.

“I definitely believe we can improve, and I am excited about the challenge that is ahead.”

“I am of course disappointed that Luis has decided his future is not with Fulham FC,” Coleman told the club’s official website.

“He has been a great servant to the club and we all wish him well.

“However, I have always said that if a player is not happy playing for this club and expresses a desire to go, then I would be prepared to let him leave; and this was the case with Luis.

“Having discussed this with the chairman and the managing director, we believe it is in the best interest of the club to invest in players who are prepared to commit their future to us.

“We will continue to add strength and depth this window and, if necessary, the next to ensure that we have a strong enough squad of players for the future to enable us to push on as a club, which remains our ambition.”

Boa Morte joined Fulham on loan from Southampton in the summer of 2000 before completing a permanent £1.7 move. He began his career at Sporting Lisbon before moving to Arsenal in 1997, but his failure to establish a regular starting place at Highbury resulted him moving to Southampton.

Will Spurs who are having an in and out season be able to beat Cardiff in the FA Cup on Sunday? Click here to find out the latest odds!