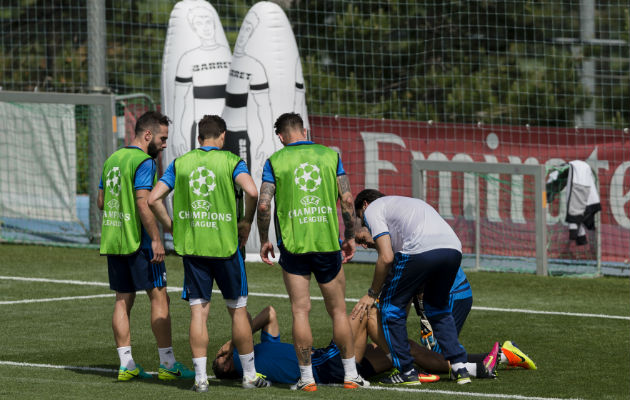 Pictures emerged this morning of the Portuguese superstar limping out of training clutching his thigh after being pushed by Real Madrid full-back Dani Carvajal and goalkeeper Kiko Casilla.

Ronaldo has worryingly failed to complete three training sessions after struggling with a persistent thigh injury after he limped off against Villarreal last month.

He appeared for Los Blancos against Deportivo La Coruna but came off at half-time after scoring twice.

However head coach Zinedine Zidane feels that Ronaldo’s participation will not be in doubt come Saturday.

He said: “There will be no problem. He felt something on Saturday when we had a game between us and he didn’t play as a precaution.

“He will be ready for Saturday and I think we are in good shape physically.”

Cristiano Ronaldo: “I had a little scare, a knock. On Saturday, I'll be at my best.” #HalaMadrid #UCLFinal pic.twitter.com/dPgXXvpMX6

However Ronaldo has tried to calm the nerves of Madridistas by saying that he will be okay for Saturday’s Champions League final.

One player who will not feature is centre-back Raphael Varane. Varane, who has spoken publicly after his lack of game time, has been ruled out of the final with a hamstring injury and the France player is now a doubt for Euro 2016.

“It is sure that he will be injured for Saturday,” added Zidane.

“I expect he will be out for two or three weeks. I hope for him it isn’t as severe as anticipated.

“I hope he’ll have the chance to do something at the Euros.”