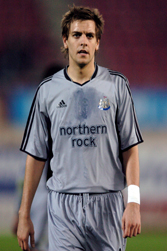 Reports in Spain claim that Camacho has instructed the club to find the funds to bring the centre half to El Santiago Bernabeu.

The 24-year-old, who has been plagued by injury since his arrival at St James’ Park due to injury, is rated by Camacho as one of the best defenders in Europe.

Woodgate has been out of action since April with a thigh injury but the Spanish media claim that Madrid are intent on bring him to the Bernabeu..

The speculation claims Newcastle are holding out for a £13.5m offer but Real are unlikely to bid beyond £10m.

If successful, Real would make Woodgate their third English recruit following the signing of MIchael Owen last week and the arrival of David Beckham 12 months ago.