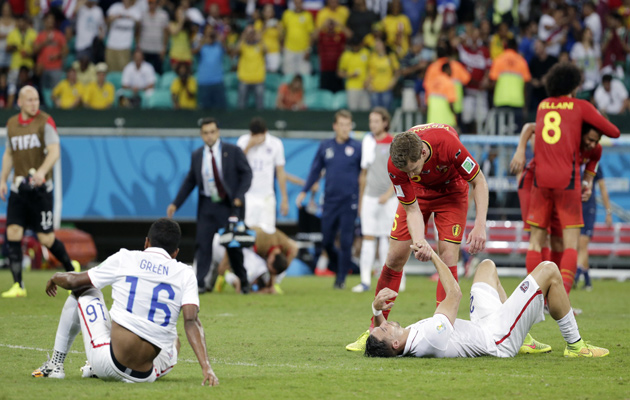 Belgium, who dominated the match almost from the outset were hanging on at the end of extra time, in the face of a remarkably spirited fightback from the USA.

The best team won, and were it not for the heroics of Tim Howard, would have won within 90 minutes. But, despite their superiority this may end up being a game that is ultimately remembered for the character displayed by the United States in an incredible final period of extra time.

Yet again, Brazil 2014 has delivered in style.

A fantastic free-kick routine from the USA and the ball reaches Clint Dempsey, but his shot is smothered by the onrushing Courtois.

The United States are pressing for an equaliser and Belgium are hanging on here.

Michael Bradley lofts a ball over the Belgian defence where the onrushing Julian Green gets there first and volleys it past Courtois.

USA push forward for an equaliser but possession is squandered and Belgium break in numbers. Eden Hazard finds De Bruyne on the left, and he plays in a perfectly weighted pass for Lukaku who lashes in a left foot shot.

Surely that goal puts Belgium in the last 8.

Mirallas finds substitute Romelu Lukaku whose fresh legs take him down the right wing and into the USA penalty area. His cutback reaches Kevin De Bruyne, who shows real composure to take a touch and steer a shot wide of Tim Howard.

It has been coming.

For the second time today we head for extra time. It’s hard to believe that we are to see another 30 minutes, so dominant have Belgium been in the second half. But a combination of poor finishing, last ditch defending and some inspired keeping by Tim Howard, have kept the United States in the game.

Ironically, the best chance of the match fell to Chris Wondolowski in the last minute, but he sliced wide from 8 yards with just Thibault Courtois to beat. The flag had gone up for offside but Wondolowski was at least a yard onside.

Fantastic jinking run by substitute Kevin Mirallas and the ball falls to Origi, but his shot is hit straight at Tim Howard.

It’s one way traffic at the start of the second half with Belgium pining the United States back in their own penalty area. Divock Origi comes closest to breaking the deadlock when he leaps to meet Toby Alderweireld’s cross, but his looping header hits the bar.

It’s been an open, entertaining half, but there have been few clear cut chances for either side. Belgium have enjoyed the bulk of the play, but for the most part, the United States have defended comfortably. Jurgen Klinsmann’s side have posed a threat on the break, but a lack of quality in the final third has undermined their attacking efforts.

Graham Zusi is robbed on the halfway line by Jan Vertonghen, who feeds Kevin De Bruyne and the forward cuts inside on to his right foot, but shoots tamely past the near post.

Belgium looking dangerous going forward and very much in the ascendancy here.

For the United States, Jurgen Klinsmann make two changes, with Geoff Cameron and Alejandro Bedoya back in the side at the expense of  Brad Davis and Kyle Beckerman.

It’s all over in Sao Paulo. Argentina have survived a final onslaught from Switzerland to book their place in the quarter-finals.

Unmarked substitute Blerim Dzemaili heads against a post from a corner.

Cancel the penalties. Argentina have scored! A brilliant run from Lionel Messi took him to the edge of the area. Just when he looked as if he was about to shoot, he laid the ball into the path of Angel Di Maria on the right. He curls his shot past Diego Benaglio. Messi saves Argentina again.

We’re heading for penalties. Switzerland have been playing for them from about the hour-mark, and Argentina can’t find the quality, Messi excepted, to make the breakthrough.

Goalless after 90 minutes here in Sao Paulo. Argentina have been better in the second half but Switzerland, with limited attacking ambitions, have held out.

A brilliant run by Messi sets up Higuain but the centre-forward can’t control the pass. Looks like we’re heading for extra time as another chance set up goes begging.

Messi flashes a dipping volley just over bar. His best chance yet.

Argentina are playing with a lot more urgency now. Benaglio makes a great one-handed save to tip over a header from Gonzalo Higuain.

Chance for Argentina. A Messi run tees up Angel Di Maria but his swerving shot is pushed away by Swiss keeper Diego Benaglio.

Goalless at the break. Argentina have been strangely subdued and the Swiss had the two best chances of the half. Granit Xhaka’s shot was pushed away by Sergio Romero after some wonderful trickery from Xherden Shaqiri. Then Josip Drmic found himself one on one with Romero, who had stayed in his area, but the Swiss striker tried to dink his shot over the keeper, but messed up horribly.

The teamsheets have been published. As expected, Ezequiel Lavezzi starts for Argentina, in place of the injured Sergio Aguero, with Maxi Rodriguez on the bench.

Switzerland are unchanged from the side that started against Honduras in their final group match.

They hardly covered themselves in glory at Brazil 2014, but no one suspected they may have been playing to orders.

Now, Cameroon officials are to investigate claims from a German magazine that seven of its players were involved in match-fixing at the World Cup. 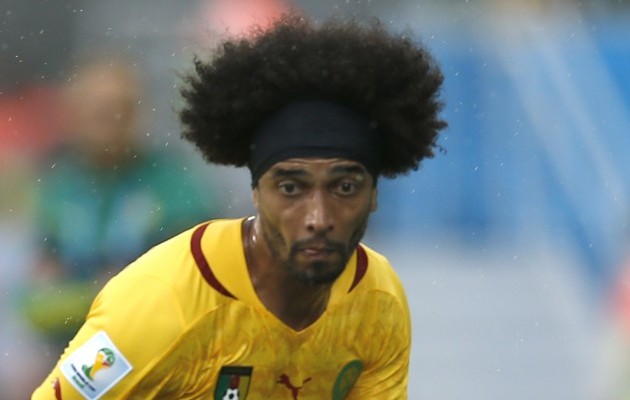 We can be hairoes, just for one day…

The weird and the wonderful haircuts witnessed at Brazil 2014.

Fans on a road trip

Few sets of supporters have been as numerous or voluble as the Argentinian fans. Tens of thousands have set off for Sao Paulo today, in the hope of seeing another Lionel Messi masterclass.

It’s been a busy few days for the FIFA disciplinary committee, with Brazil media chief latest in the firing line after he was sent off against Chile last saturday. Read about that and all the other disciplinary measures of the past 24 hours. 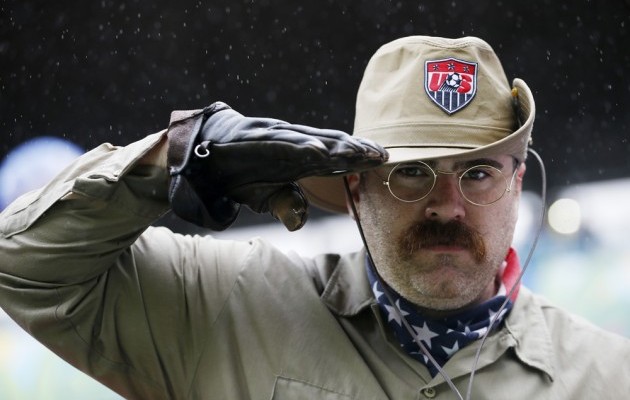 The awkwardly named Round of Last 16 reaches its conclusion today with what look, on paper at least, to be two more cracking ties.

Argentina, despite enjoying a 100% record in the group stages, have flown pretty much under the radar so far, but there will be no hiding place today when they face Ottmar Hitzfeld’s Switzerland in Sao Paulo.

In the day’s other game, Belgium, who won each of their group matches without ever really looking like genuine title contenders, take on the USA for whom this tournament has a genuinely transformative feel to it. A win tonight and football Stateside really could be set for take off in a big way.