Juventus coach Antonio Conte will face trial for his role in the Scommessopoli match-fixing scandal after the Disciplinary Committee rejected his plea deal.

The news will come as a blow to the 42-year-old, who had previously reached an agreement with federal prosecutor Stefano Palazzi to avoid prosecution. A plea bargain had been agreed which entailed Conte serving a three-month ban and paying a €200,000 fine, but the Disciplinary Committee presided by Sergio Artico has turned down the deal. Conte will now face a trial and the possibility of a 12-month ban.

Even so, the terms of the ban are relatively lenient. Conte would still be able to coach Juve on a day-to-day basis, as well as provide team talks before the squad enter the stadium on the day of a game. The punishment would basically mean he would be unable to sit on the bench or enter the dressing room before or during the game.

Conte is charged with failing to report attempts to influence the outcome of two Serie B matches against Novara and AlbinoLeffe in the 2010-11 season when he was in charge of Siena.

Juve defender Bonucci has been charged with match fixing, a much more serious accusation, as he risks up to a three-year suspension. There have been reports that the Italian international arranged a deal with prosecutors to bring his ban down to one-year.

The newspaper reports that the Glazer family has moved to block any future hostile takeover of the club, in a move that will further anger United fans.

The change is revealed in documents published as part of the club’s planned flotation. The float stands to net the Glazers around (£96m), despite previous assurances that proceeds would go towards paying down the club’s debt.

Among the revelations in the Guardian piece is the claim that the Glazers have taken £520m out of United since they took the club over in 2005, with most of that figure being accounted for via interest and fees related to the club’s borrowings. Meanwhile, of the £520m, £38m has been paid directly to the Glazers via £28m in consultancy fees to their companies and a £10m dividend.

Nice work if you can get it.

The report claims: “A highly lucrative “2012 Equity Incentive Award Plan”, as it is described in the Initial Public Offering (IPO) prospectus released on Monday, has raised questions among some United fans as to whether Sir Alex Ferguson, the manager, and David Gill, the chief executive, will stand to personally profit from the Glazers’ decision to list the club on the New York stock exchange.”

Mention of both Ferguson and Gill is significant as the pair have been among the most vocal defenders of the Glazer regime. If they do stand to benefit from the windfall, it would place their unwavering support of the club owners in a new, and not altogether flattering light.

Only nine days ago, Ferguson described the Glazers as “great” and suggested that “the majority of real fans will look at it realistically and say it’s not affecting the team”.

Although as Manchester City disappear into the distance, it can only be a matter of time before that majority shrinks to an emasculated minority.

FIFA president Sepp Blatter has advocated FIFA change its “say no to racism” banners to “kick out racism.”

Appearing at a joint reception to launch a partnership between FIFA and Kick It Out at Wembley Stadium, Blatter said racism should be kicked out of the game and out of society.

“Racism has existed everywhere, since old ancient times,” Blatter said. “Now all of a sudden we have racism in our game. Something is wrong, because our game is based on discipline and respect. Our game is the school of life.

“We are over 300 million people in our game, directly, and those 300 million people with their families it makes one billion. A family of one billion, a seventh part of the world population. You cannot expect that this part will be better than the six other parts. We should. Our game is based on discipline and respect.”

Laudable sentiments and a far cry from last Autumn, when the gaffe-prone FIFA chief suggested that a handshake was all that was needed to eradicate racism from the sport.

Kick it Out’s chairman Lord Herman Ouseley response to that advice was to point out that Blatter didn’t understand racism because he never was a victim.

“The feelings of fear, hurt, isolation, vulnerability and exclusion are all part of that unwelcoming experience,” Ouseley said.

The launch of the partnership could not have been more timely, coming on the day that Swiss defender Michel Morganella was banned from the Olympics for a Tweet insulting South Koreans.

Asked about Michel Morganella’s expulsion from the game, Blatter said he backed it.

No carnival for Rio

Meanwhile, Lord Ousley has expressed surprise at the charge being brought against Rio Ferdinand in the now-infamous chocicegate.

The “choc-ice” Tweet is a reference to Ashley Cole following John Terry’s acquittal of racially taunting his brother Anton.

“I am surprised,” he said. “I didn’t think he was the initiator – but there has to be consistency.

“If the FA have been charging other people for Twittering and consider a rule has been breached, they are under an obligation to invoke procedures if that is appropriate.

“Ideally these things should be resolved within hours. There has been a lot of damage done and the police intervention didn’t help at all because one investigation should not stop the other.”

Ousley was also unhappy that Terry was allowed to represent England at Euro 2012, while the the trial hung over him.

“If those things are threatened by allegations, the need to be investigated and concluded first before you can enjoy that honour.”

Which is a nuanced position to hold, but not one in keeping with the long established tradition that a person is innocent until proven guilty. Even John Terry.

Recreativo de Huelva fans have been up in arms about the club’s new 2012-13 away kit.

Indeed, some organised a protest march this week – with the intention of pressurising kit manufacturers Hummel into producing another kit in time for the start of the season.

Hummel’s excuse for kit? They ’only ten days to come up with two new kits’ after agreeing to take on the Recreativo de Huelva contract at short notice. Ten days, and yet they only devoted ten minutes to the design.

In case you haven’t seen it, here’s the montrosity in all its dubious glory. 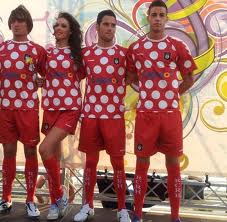 Costa Rica’s Uruguay concede a free-kick free kick, which is lofted to edge of area, where Deportivo Saprissa’s Juan Bustos Golobio is waiting to lash in a volley.

“It was impossible for us to turn down Paris Saint-Germain’s offer. It has saved us a lot of money in transfers and wages, meaning our finances are secure for many years to come. We did not want to sell Thiago Silva or Ibrahimovic and turned down the first offer. We then thought about the Financial Fair Play, which would not have allowed the deal to go through next year, so we had to accept it with weeping hearts.”

Silvio Berlusconi, one of the people who brought the Italian economy to its knees, preaches the virtues of good housekeeping.

No one likes him, he doesn’t care

Real Madrid coach Jose Mourinho, who we haven’t heard a peep from this summer, has realised that with the new season only a matter of weeks away there is not time to be wasted if he wishes to construct the siege mentality that characterise all his teams.

The Portuguese has admitted that he does not care about what other people think of him, as long as his own players appreciates what he is doing.

“When you’re a leader you can’t forget that. I don’t care what other people think, only what my own people think.”

The controversial coach also mentioned the very strong relationships he still enjoys with all the players he has worked with over the years.

“When I say forever, I mean forever. I can’t say that the players I had at Chelsea, Porto and Inter are my ex-players, they continue to be my players,” he said.

“And they don’t talk about their former boss, they say ‘You are the boss’. They are ties forever.”

The feud between the Scottish Football Association (SFA) and The Rangers Football Club (that’s Rangers to you and me) shows no sign of abating.

After being accused by Rangers boss Ally McCoist of pursuing a vendetta against them, the chief executive of the SFA, Stewart Regan, has responded by accusing the club of ‘undignified and irresponsible’ actions.

Regan spoke yesterday about how counter-terrorism police officers had visited the SFA to offer security advice after threats were received during the period following Rangers’ descent into liquidation.

When asked about his working relationship with Rangers, Regan said: “Some of the comments and some of the behaviour has been undignified and irresponsible.

“At a general level, there is recognition at the Scottish FA that Rangers want to actually get back to the top of the game.

“They now have a conditional membership, they are close to getting that membership converted into a full membership, and I think then it’s down to the club and the new board to take the club forward.”

Meanwhile, Rangers chief executive, Charles Green, has done little to the calm the situation. Not content with referring to the SFA as “the enemy”, he was spotted – during Rangers’ first competitive match at Brechin on Sunday – applauding (on two separate occasions) while visiting fans chanted: “If you hate Stewart Regan clap your hands.”

Whether that qualifies him as a fit and proper person to run a well respected sporting institution, who knows. It certainly makes him ideally qualified to manage the madhouse that is an Old Firm club, though. Of that, there is little doubt.