Alex has been explaining how his eight-year spell at Fenerbahçe came to an end after a brief meeting with the club President, Aziz Yildirim, which lasted just three minutes.

The 35-year old Brazilian playmaker had fallen out of favour with the coach Aykut Kocaman, and things came to a head after the 2-0 defeat this weekend against Kasimpasa.

“I walked into the president’s office at 16:15 and left at 16:18,” Alex said. “Eight years at the club and he decided everything in just three minutes.

“On Monday, when I got to training, I was called by the coach into his office and he told me that I was removed from the first team. I argued that, for an athlete to be removed it has to be because of a disciplinary reason.

“The coach gave me the following explanation: “I am the coach and the leader of the team, but you’re big and strong.” said Alex.

There has been unsubstantiated speculation that Kocaman wanted rid of the Brazilian because Alex was close to taking over from Kocaman as the clubs leading goalscorer. At the time of his departure, with 136 goals to his name, Alex was just five goals short of Kocaman’s tally.

A player leaving a football club is hardly front page news, but when an iconic player leaves a club just a fortnight after their supporters had unveiled a statue in his honour, it becomes so.

The decision has not gone down well with the Fenerbahçe supporters, who protested by burning banners depicting the image of the club’s President’s, Aziz Yıldırım. It wasn’t so long ago that many of these same fans were campaigning on behalf of Yildrim while he languished in jail last year awaiting trial on match-fixing charges.

A chant ‘We will betray those who betray Alex’ could be heard outside the Brazilian player’s house yesterday.

The extent of Alex’s popularity should not be underestimated. The original tweet he sent announcing his departure from Fener was retweeted 53,000 times – a record for Turkey!

New national coach, same old row, as Didier Deschamps becomes the latest France manager to discover that when it comes to loyalties, Arsene Wenger is a club man first, and a country man a distant second.

Wenger was heavily critical of Deschamps decision to include Abou Diaby in the team to play Finland so soon after his return from a lengthy injury lay-off.

“I have repeatedly said that if France wanted Diaby against Spain (16 October in Madrid ), they would not have taken him to Finland,” Wenger added. “They could call it, but do not play.

“The boy had been missing for a year, and played the last four or five games. You have a break and he needed two weeks to fully recover. It was a mistake to play in France team.”

The comments prompted a response from former France coach Raymond Domenech, who had his fair share of run-ins with Wenger during his turbulent 6 years in charge.

Domenech tweeted: “Be brave, Dédé [Didier Deschamps], we all know Arsène’s views regarding national team team selections. You are the boss!”

Given Domenech’s singular unpopularity within France, it’s unclear whether Deschamps would actually welcome his intervention.

Napoli have come under suspicion after the country’s Finance Police raided the club to seize documents involving the buying and selling of players and relations with agents.

According to the ANSA news agency, police were acting on a mandate from the public prosecutor in Naples.

Police also carried out searches at the offices of the Italian football federation (FIGC) in Rome.

A FIGC spokesman told AFP: “The police requested copies of contracts between agents, the players and the club and we obliged. That is all we can say on the matter.”

Napoli lawyer Mattia Grassani said the club has respected contract rules since Aurelio De Laurentiis took over the team in 2005, adding that the club was “completely transparent” with the police demands.

Which, if true, would be a first for Italian football.

“No tycoon should be allowed to pump crazy money into a club with sponsorship from five companies he controls. If that happens, financial fair play will fail. I would not even welcome him. What if the sheikh, as shown by Malaga, lost interest?”

Ahead of his side’s Champions League game against Manchester City, Borussia Dortmund’s chief executive Hans-Joachim Watzke says he would have rebuffed any approach from City owner Sheikh Mansour.

Dropping down the lower leagues in England to find this stunner by Dean Cox for Leyton Orient against Walsall.

Barcelona skipper Carles Puyol, who has suffered a number of injury misfortunes in recent years, will be out of action for 8 weeks after dislocating his elbow during his side’s Champions League victory over Benfica on Tuesday.

Puyol, who has already overcome a fractured cheekbone and a knee ligament injury this season, will miss this weekend’s Clasico encounter with Real Madrid.

“These are injuries which happen in football, but not very often and they are all happening to him,” coach Tito Vilanova said. “It is a blow because he is a very important player and because it will oblige us to keep playing players who need a rest.

Midfielder Cesc Fabregas who scored the second goal in Barca’s 2-0 win, said that the injury upset those on the pitch.

“It left you feeling bad,” Fabregas said. “He is a fundamental player. He is very strong. He came back from a few weeks out and is injured again. But he is the mentally strongest guy I know.”

Unfortunately, physically, he appears to be falling apart.

Despite his frequent injury mishaps, Puyol remains in good spirits.

“Good day! The sun always comes out again… thanks for all your messages! A big hug,” Puyol wrote on his Twitter feed, adding that he would be back to full fitness soon.

The less squeamish among you may wish to avert your eyes now. Here’s how Puyol picked up the injury.

It’s unlikely that Emile Heskey ever thought he’d become a poster boy for anything, let alone the launch of a new football league season.

But, here he is, at 34, standing face-to-face with  Alessandro del Piero preparing for the start of the forthcoming and eagerly awaited A-League season. 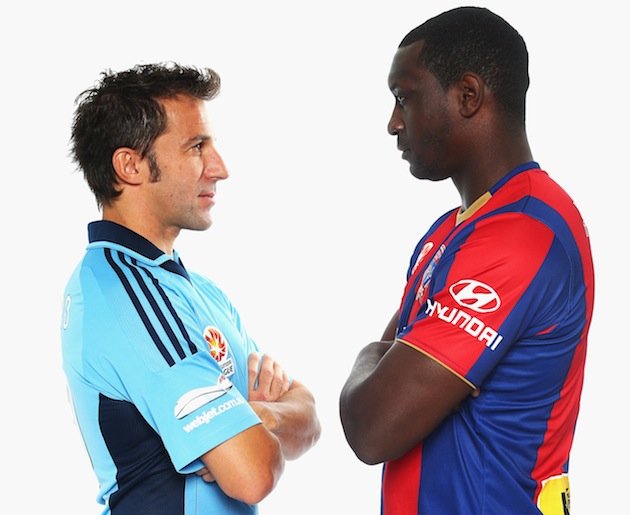 Coincidentally, footage has emerged of an 11-year-old Heskey appearing on Emu TV – bear with me.

The footage, from 1989, shows that even then the future Newcastle Jets man was a formidable presence. It’s a tenuous football connection, but the presenter Hull died when he fell from his roof whilst trying to re-tune his television aerial for England 5-1 victory over Germany 5-1 in 2001.

The head of the Kosovo Football Association (FFK) has accused FIFA of double standards after FIFA delayed its approval of the country’s request to play international friendly matches.

FIFA agreed in principle to allow Kosovo to play friendly games last May, but the decision has not yet been ratified due to opposition – mainly from Serbia – and now plans to discuss the issue at its next executive committee meeting in Tokyo in December.

FFK president Fadil Vokkri said that FIFA’s stance was inconsistent with Monday’s ruling by UEFA to allow the British colony of Gibraltar to become a provisional member of the European governing body.

Only countries that are recognised by the United Nations can be accepted as members by FIFA and UEFA, but the latter agreed to admit Gibraltar provisionally following a ruling from the Court of Arbitration for Sport (CAS).

Vokkri said: “We do not understand the reasons behind this, in particular when one sees the double standard shown by UEFA between the situation of Kosovo, recognised by 91 countries in the world… and the situation of Gibraltar, a non-independent territory recognised by no one with embryonic football. We are surprised by this difference of treatment in light of the obstruction we have been facing for years now.”

“Maybe the method adopted by the Gibraltar FA – going to CAS – should have been adopted by us,” Vokkri said. “We chose a realistic approach with sensible solutions based on football facts and we have not been heard.”

You do realise this is FIFA you’re dealing with? ‘Realistic’ and ‘sensible’ are normally left at the front door.

Former Bari defender Andrea Masiello has been given a suspended 22-month prison sentence on Wednesday after admitting he deliberately scored an own goal to help local rivals Lecce avoid relegation from Serie A in May last year.

The 26-year-old evaded jail after negotiating a plea-bargain arrangement at a magistrates court in Bari. Given that he is now without a club and has been banned from football for 26 months, the suspended element of his sentence seems somewhat academic.

His cohorts Gianni Carella and Fabio Giacobbe, who bet on a number of fixed matches, were handed suspended sentences of 17 months.

Bari had already been relegated when they met Lecce, who were still fighting to avoid the drop to Serie B, and his suspicious own goal 10 minutes from time guaranteed them a 2-0 win.

Lecce were subsequently relegated for their involvement in the scandal.

Masiello’s lawyer told the Italian media: “Andrea Masiello only wants to live peacefully and in total silence, and especially does not want to carry on being talked about.”

Let’s hope that within this self-imposed Trappist state, Masiello has time to ponder his role in the decline of Italian football.

Speaking of which, Milan captain Massimo Ambrosini has appealed to fans to go to the San Siro for this Sunday’s derby against Inter with poor ticket sales threatening to leave gaping gaps in the stadium.

So far only 55,000 tickets have been sold, which is a significant drop on the usual number and includes just over 23,700 Milan season ticket holders, the lowest number since 1986.

“Guys, a derby without you makes no sense. Buy tickets because we can all go together to the stadium to win this most important of games,” Ambrosini said in a video released by the club on their website.

Italy striker Stephan El Shaarawy joined the desperate plea for support, saying: “Now more than ever we need your help.”

Yet just over 28,000 saw Milan win their first and only home game of the season so far, 2-0 against Cagliari on September 26, the lowest attendance since Silvio Berlusconi took over the club in 1986.

Disappointing performances, Italy’s economic problems and fans’ disaffection at the sales of Zlatan Ibrahimovic and Thiago Silva have been blamed for keeping supporters away.

“It might be the recession, the economic crisis or decline in results of Milan and Inter, but for the first time in 26 years ticket sales are slow for the derby,” Milan vice-president Adriano Galliani said on Monday.

“I’m appealing to the fans to come to the stadium.”

Milan are 11th in Serie A with seven points, five behind third-placed Inter and nine behind leaders Juventus.