Inter have made a €25million bid for Manchester City striker Carlos Tevez. The offer does not come close to matching City’s valuation of the Argentinian, but given that he has been AWOL for several weeks, they may be forced to conclude that it is as good a deal as they are likely to get.

“There are no secrets in football,” Moratti told Controcampo. “The offer is €25 million. Now it is up to City whether they accept that bid or not.”

“At this moment in time it seems that we don’t need Tevez, but football gives a different answer on a daily basis. I would keep all of the players that are in the squad right now, but there is still time until the transfer window closes. We’ll wait and see.”

The final say will rest with Tevez with, it has to be assumed, no little input from his agent.

Xavi, a youth academy graduate, made his debut under former coach Louis van Gaal in a Spanish Super Cup game in August 1998.

Not far behind the playmaker in terms of appearances for Barca is club skipper Carles Puyol who lies third in the all-time list having played 357 games. In 7th spot and given the traditional longevity of keepers a candidate to one day eclipse Xavi, is Victor Valdes who has made 313 appearances for the Catalan outfit.

Strathclyde Police have arrested and charged a man after Rangers duo Maurice Edu and Kyle Bartley were allegedly subjected to racist comments on Twitter.

A 41-year-old man will appear before Glasgow Sheriff Court on Monday to answer charges of directing racist comments towards the duo.

Both players took to Twitter to condemn the abuse they had received.

Bartley, currently on-loan from Arsenal, wrote,  ”Disappointing that in 2012 things like this are still happening. Hopefully the police will take action. Thank you all for the support.”

Hard to warm to FIFA

Premier League chief Peter Scudamore has revealed that it’s difficult not to be critical of FIFA.

After being battered by a series of scandals over the past 12 months, FIFA’s reputation is at its lowest and Scudamore admits that it has become difficult to respect football’s governing body.

Scudamore told talkSPORT: “FIFA have had their difficulties, it’s very hard to have huge regard for the institution the way it’s performed in the last couple of years.

“Whilst one has to have a working dialogue with everyone in football and whilst I take part, I think I’m a constructive critic of what they do.”

Scudamore also dismissed suggestions that the 2022 World Cup could be switched to winter because of the summer temperatures in host nation Qatar.

“All sorts of gloves would come off, it’s just a ludicrous prospect,” he said. “All leagues across the world are used to this pattern.”

Some 30 players and six coaches from abroad will be auctioned off in the city of Kolkata for the Feb 25-April 8 league.

“We have signed seven ‘icon’ players for the auction and each of the six teams will have one such player with a $600,000 salary cap,” Bhaswar Goswami, executive director of Celebrity Management Group (CMG), told Reuters.

The inclusion of several of those names as ‘icons’ stretches the credulity of the concept to breaking point.

“The league is modelled on Major League Soccer and of course IPL,” Goswami added.

“We saw the hype and buzz around players’ auction in IPL and feel it can be an equal success. It’s a brilliant concept. We expect owners to make profit much earlier than the IPL franchises.

Two minor problems with that:  firstly, unlike its cricketing counterpart, none of the players up for auction would be considered the best in the world; secondly, India is not exactly a football-mad country.

Robert Pires was surprisingly candid in explaining why new venture appealed to him.

“Since I had nothing in Europe, why not try something completely unknown? I’ve never been over there,” Pires told L’Equipe’s website.

“I am proud to be the first Frenchman to go and play there. And eight weeks is nothing.”

Punch up with fan

Sevilla winger Diego Perotti was involved in a punch-up with one of the club’s fans outside the team hotel after the 0-0 draw with Espanyol on Saturday.

It is thought Perotti had been mixed up in an online row with the supporter, who then waited outside the hotel for him. Perotti can count himself unlucky to have encountered a genuine warrior rather than the more common internet version.

The 23-year-old Argentine international, who signed from Deportivo Morón in 2006, confirmed the incident viaFacebook on Sunday.

“I want to thank everyone for their support and those who wrote on my wall and sent private messages,” he posted. “I know the Sevilla fans well and know this incident does not involve them; this person does not deserve to form part of such great support.”

Perotti, who has struggled with injuries in the past 12 months, came off the bench to replace Manu del Moral in the 55th minute of the Espanyol game but was whistled at by the crowd when he pulled up after a short run.

Just days after he was serenaded by Arsenal fans following his goalscoring return to the club, Thierry Henry was seen remonstrating with fans in the wake of Sunday’s 3-2 defeat to Swansea.

Self-professed Arsenal fan Henry, whose fairytale return to the Emirates has been one of the more uplifting stories of 2012, took his team-mates over to acknowledge the thousands of travelling fans.

However, he took exception to something that was said from the stands and was seen embroiled in an angry exchange with at least one fan.

A club spokesperson told the Daily Mail that Henry had said: “No matter what, you should support the team.”

The Sun claim that the fan had shouted at Henry and his team-mates: “Where is the heart and the character and the fight?”

Dean Windass has admitted he attempted suicide earlier this month after battling with alcohol and depression following his retirement from the game two years ago.

A much-travelled journeyman forward whose career spanned 20 years, Windass came to prominence in 2008 when he scored the goal that took his hometown club, Hull City, to the Premier League for the first time in its’ history.

However, his 18-year marriage broke up, much of his money had been frittered away and grieving for his recently deceased father John, Windass decided to take his own life.

His first attempt was thwarted by a former girlfriend who turned up after he had tried to overdose on tablets.

The following day he tried to hang himself with a bedsheet.

“I tied it to a handrail at the top of the stairs but it was too long,” he added.

“I was quite drunk and couldn’t get it to work, so I got a belt instead. At that point a friend came round so I couldn’t go through with it.”

Windass admitted that many players struggle coming to terms with the end of their playing career.

“We’re not the brightest but you play football all your life. There are hundreds of footballers in the same boat. There is nothing to get up for in the morning.

“The Professional Footballers’ Association or the governing body need to help us. I have hurt the people closest to me, so I’ve come out today and admitted I need help.” 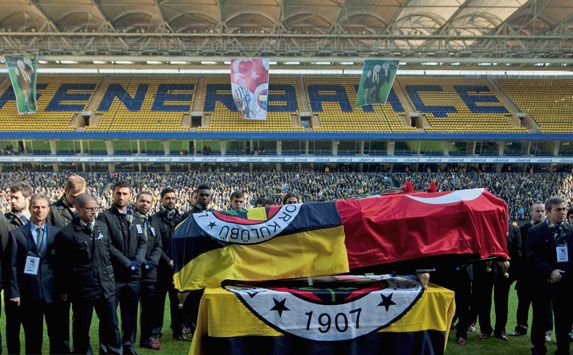 Turkish football bade farewell to Lefter Kucukandonyadis, one of the country’s best known players who has died at the age of 86.

There were moving scenes at Fenerbachce’s stadium, where 10,000 fans paid tribute to a striker who scored 423 goals in 615 games for the Istanbul club.

Midfielder Emre Belozoglu and other Fenerbahce players carried his coffin, draped in Turkish and Fenerbahce flags, to the pitch before the crowd observed a minute of silence in his memory.

Born in 1925 in Istanbul, Kucukandonyadis was the first player from Turkey to play abroad. He transferred to Italy’s Fiorentina in 1951 followed by a spell with Nice in France.

Kucukandonyadis was the captain of Turkey’s national team, making 46 appearances for his country.

After his retirement in 1966, Kucukandonyadis coached clubs in Greece, South Africa and Turkey.