Back to the future

Nothing succeeds like failure, they say, and after being sacked by his two previous employers, Steve McClaren has had to wait long before being be re-employed by another of his former clubs, FC Twente.

McClaren, 50, has been out of work since leaving Nottingham Forest in November after just 10 matches, but he is expected to be re-appointed by the Dutch outfit following the dismissal of Co Adriaanse.

The former England coach moved to Twente in 2008, where he led the Enschede club to its first league title and momentarily rehabilitated his managerial reputation.

McClaren’s return to Holland does allow us the opportunity to revisit his much-mocked attempt as assimilation in the country by speaking English as a second language.

Paris Saint-Germain’s new coach Carlo Ancelotti has identified several areas in which the club must improve if it is to realise its aim of achieving European domination.

“I think we can improve this team, improve organization, the playing, the personality and the pride of this team,” said Ancelotti.

“These (owners) are all people who love football and they want their team be first in France and in Europe in general,” Ancelotti said. “It’s a team of ambitious people and this is very important for a coach. It gives me great motivation.”

Ancelotti’s ambitions for PSG will have to proceed without the help of David Beckham, after the former England skipper decided not to take up an offer to play in the French capital.

“He will not come to PSG,” said the club’s sporting director Leonardo, citing “family reasons” for the 36-year-old decision.

“It’s over,” Leonardo added. “It’s a shame. “But the welfare of his family in Los Angeles, the wish not not to change everything in his life, weighed heavily.”

With a return to England already ruled out, it would appear that Beckham will continue his career with LA Galaxy.

Celtic’s third in their 3-0 win over Dunfermline came via a long range free kick from Charlie Mulgrew. Here’s the fan’s eye view of the strike from the stands. 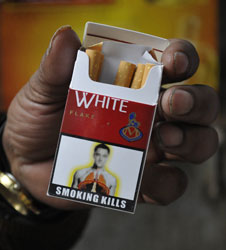 John Terry’s representatives have lodged a complaint over the use of his image as a tobacco warning printed on cigarette packets in India.

The indistinct image featuring the head and shoulders of a man resembling Terry above a warning that “Smoking Kills” was created by the government’s Directorate of Visual Publicity, the Indian Express reported.

A spokesman for Elite Management, which representsTerry, told the BBC no consent had been given.

His statement read: “It’s been brought to our attention that an image of our client has been used on some cigarette packaging without our consent or knowledge. We’ve now instructed our legal team to investigate this matter.”

As to why an image of Terry, who has been accused of a lot of things in his time but never of being a smoker, appeared on the packets, well, that remains a mystery.

K.S. Dhatwalia, additional secretary of the Directorate of Visual Publicity, told the Express it was “not clear” how the image had been used.

“We sent the creative to the health ministry and they then cleared it and circulated it,” he said. “But how Terry’s picture got to be used is not clear.”

A British MP has called for Sepp Blatter’s conduct as president of FIFA to be independently investigated.

Collins spoke following a claim by former FIFA Vice-President Jack Warner that he was awarded FIFA World Cup broadcast rights for as low as US $1 after assisting Blatter in elections to become president of the sport’s world governing body.

Warner alleged he was awarded the broadcast rights for the 1998 to 2014 World Cup at nominal rates after assisting Blatter’s re-election campaign.

“Is he serious about sorting the mess out, or is he only interested in protecting his own?” asked Collins, who sits on the Culture, Media and Sport Select Committee of the British Parliament.

“These are serious allegations that must surely go to the very top of FIFA and need to be fully and independently investigated.

“In the last year, 11 of the 24 members of FIFA’s ruling Executive Committee have faced allegations of corruption; no real progress towards reform has been made within FIFA and there has never been an independent investigation into all of the bribery allegations made against them.

“One man is ultimately responsible for this – Sepp Blatter.”

In the season’s longest-running and most tedious of transfer sagas, Milan claims talks over a move for Carlos Tevez are ongoing, but insist they will not meet Manchester City’s demands.

The main sticking point between the two clubs is the Italian side’s desire to take the player on-loan as opposed to the Premier League outfit’s determination to sell him on a permanent basis. Given Tevez’s conduct in recent months it is easy to see why City would want to see the back of him. Similarly, Milan’s reluctance to make a long-term commitment on such an unstable character, is entirely understandable.

Milan coach Massimiliano Allegri refused elaborate on the club’s pursuit of Tevez claiming the move is not a priority.

“I don’t know,” said Allegri. “It’s still too early to say, but Milan already has other stronger strikers and so we are not looking at the moment.”

FC Sion have pledged to continue their legal battle against what it has called the “blackmail” imposed by FIFA after the Swiss Football Association (ASF-SVF) imposed a 36-point deduction against the club.

The ASF-SVF’s decision came after FIFA threatened to suspend the Association if Sion was not punished for fielding six players signed in the summer when the club was subject to a transfer ban.

The club lost an appeal against the ruling and took the case to the Swiss courts, an action expressly prohibited by FIFA and UEFA rules.

The ASF-SFV has deducted three points for each of the 12 games in which Sion had fielded any of the six players, leaving the team bottom of the Swiss top flight with minus five points and almost certainly facing relegation.

From Brazil comes a heartwarming tale of football’s capacity to offer redemption.

Under an agreement between the Brazilian government and local authorities in the 12 cities hosting 2014 World Cup games, at least five percent of the workers building or renovating the stadiums must be prisoners.

Galatasaray have hit out at the Turkish Football Federation (TFF) after the organisation admitted that it would reconsider a law issuing compulsory relegation for any side caught fixing matches.

A number of Gala’s rivals including Fenerbahce and Besiktas are under suspicion of match-fixing, and the Istanbul-based club warns that failure to punish the clubs would undermine claims that the issue of match-fixing is being taken seriously.

“We have constantly warned the TFF to make a decision to clear the path for Turkish football and give it the place it deserves in world football,” a club statement read, according to Hurriyet Daily News.

“But today, we see that the TFF, with reasons that are clearly understood but rarely spoken about, is avoiding using its powers, leaving it to the general assembly meeting.”

Hearteningly that message was also endorsed by a Fenerbahce fan group which said it would prefer to clear suffer relegation if it mean the club’s name would be cleared, rather than endure a future tainted by continued suspicion of wrongdoing.

“Changing the 58th article [which demands mandatory relegation] will put Fenerbahce in the place of a guilty club, and even if our club is cleared of the charges, it will remain under a shadow of doubt,” the statement began.

“The Fenerbahce fans’ conscience will not accept remaining in the league with a rule change.”