Patrice Evra has been informed that he may have trouble proving he was racially abused by Luis Suarez, because a term he may have found offensive does not carry the same meaning back in Suarez’s native Uruguay.

The Manchester United defender accused Suarez of using racist language during a 1-1 draw at Anfield on October 15th and is still waiting to discover whether the English Football Association will charge the Liverpool striker with misconduct.

However, there are reports that Suarez’s defence will rest on the fact that people in different countries interpret the same words differently.  Use of the word “Negrito”, for example, carries no derogatory meanings in some countries – often in the same way someone could be called “pal” or “mate”.

An example of this comes in the form of the message Dani Pacheco, the Liverpool player who is currently on loan at Rayo Vallecano, sent to his Spain under-21 team-mate Thiago Alcantara via Twitter on Friday. It begins: “Negrito, enjoy yourself . . .”

Despite living in Europe since 2006 the Liverpool striker is – apparently – still unclear as to what might cause offence when embroiled in a heated argument with a black player. In which case, then the worst he can be accused of is gross stupidity.

Say what you like about Suarez, but the ongoing controversy has certainly not affected his predatory instincts. His four-goal haul against Chile was the performance of the weekend.

Anything you can do…

Last week it was Rangers goalkeeper Grant Adam who was accused of making sectarian remarks and determined not to be outdone it’s now the turn of rivals Celtic, whose fans have been charged by UEFA of “illicit chanting” of Irish political songs at a Europa League match.

The case was opened after Celtic’s home match against French club Rennes on November 3 when police reported the “offensive” chants to UEFA’s match delegate, Christian Kofoed of Denmark.

Which is particularly tricky for both Celtic and Rangers, as at Old Firm matches, they’re practically compulsory.

A momentous occasion awaits Gianluigi Buffon on Tuesday when he makes his 112th appearance for Italy. That draws him level with Italian goalkeeping legend Dino Zoff and makes him the joint third most capped Italian footballer of all time. Only Fabio Cannavaro with 136 appearances and Paolo Maldini with 125 lie ahead of the Juventus keeper.

Buffon celebrated his 111th cap on the 11/11/11 in style, keeping a clean sheet and saving a late penalty against Euro 2012 co-hosts Poland. 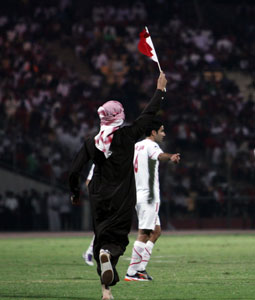 Iran has summoned Bahrain’s envoy to Tehran to protest about the treatment of Iranian players and supporters after a 2014 World Cup qualifier in Manama.

The official IRNA news agency said some Bahraini supporters ‘threw water bottles and other objects at Iranian players and supporters in an insulting manner’, and committed ‘immoral acts… as security forces failed to confront them’.

The match was played against a backdrop of regional tensions amid a growing rift between Tehran and Manama – a situation exacerbated by a masked man waving a Bahraini flag invading the pitch late in the first half.

Ties between Iran and Bahrain have become strained this year as the Gulf Arab country’s Sunni minority regime has clamped down hard on pro-democracy protests led by the majority Shiite population.

Iran, which is predominantly Shiite, has condemned the crackdown and has criticised heavy sentences meted out to arrested protesters.

Al Wasl coach Diego Maradona has once again blasted the standard of refereeing in UAE claiming they are against his side despite its 1-0 Emirates Cup win over Al Ain on Saturday. We’ll soon be able to set our watches by the Argentinian’s outbursts.

“When there was a ball between Al Wasl and Al Ain after somebody had fallen, the ball always went directly to Al Ain,” Maradona told reporters.

Maradona launched a similar rant at the match officials following his side’s 1-0 defeaat  to Al Jazira in the Pro-League last week.

“I want to send a message to the referees – I want to help and support them to improve their standards – but we, the players, staff, administration and fans at Al Wasl will fight against them and overcome their decisions to win whatever happens if they are against us, in order to make our goals a reality,” he added.

“I hope the referees improve their standards and become more focussed. I don’t want to complain, I genuinely want to help them raise their game.”

Goal of the Day

Santos’ winner in their 3-2 away win at Ceara was a stunning effort by Diogo.

It’s not often you see the natural world in all its glory on a football pitch. The highlight of Colombia’s 1-1 draw with Venezuela at the weekend was an owl landing on the crossbar and attempting to eat a rat.

Tevez made an unscheduled return to his native Argentina last week, which prompted fresh speculation that Boca could offer him a route out of Manchester City.

However, although Ameal admits to have had contact with Tevez, he admits they could not afford a deal for the striker.

“Carlos is deservedly a very important figure here,” Ameal told local radio. “But from the economic point it is impossible.

“I did talk to him, and I lent him our support.”

The only goal of the tie was an impressive one, coming from Ghanaian-born defender Harrison Afful.

Esperance now represent Africa at the FIFA Club World Cup next month in Japan where they will be joined by European champions Barcelona, Santos of Brazil who are the South American title holders, Monterrey of Mexico from Concacaf, Asian champions Al Sadd of Qatar and Auckland City from New Zealand, who are the Oceania club champions.

The final team in the tournament will be the club champions of the host nation, Japan – the J-League finishes on December 3.

Spanish press reaction to the country’s 1-0 defeat to England on Saturday has carried the whiff of sour grapes.

Marca were disparaging of both the quality of Spain’s performance and of their side’s rivals.

“This was sterile, leaden possession,” the paper wrote. “The defeat says more about a certain carelessness of Spain than the qualities of their adversary.”

“The Spanish side left Wembley with the bittersweet sensation of a team who were superior to their opponents in all facets of the game except the scoreline,” noted the editorial.

Marca had very little nice to say about England at all, describing winning goal as “very English and very Lampard-esque.”

AS editor Alfredo Relaño claimed that “England parked the bus in front of goal, grabbed a goal at the start of the second half with the only ball dropped into our area and came away with a victory.”

El País suggested Vicente Del Bosque’s side lacked any enthusiasm on the night.

“The team took on routines which gave off signs of boredom: little movement off the ball during possession, less runs and an unusual lack of shots on target,” it wrote.

The Spanish players were scarcely more enthusiastic about the England performance.

“We saw two very different styles of teams,’ said Cesc Fabregas. “One was defensive and one was trying to play football and score goals. In the end, the one trying to score goals didn’t and the one not trying to did.”

David Silva whose evolution into Lionel Messi can charitably be described as a work in progress, was equally dismissive of the home side.

“We were quite surprised how defensive England were,” he said. “All the team defended with their lives and the only way they could score was with a rebound.

“We have to accept that this way enabled them to beat us. This is how every team lines up against us. It is happening in every game.”