Player of the Year

The nominees for the annual Barcelona Player of the Year award – otherwise known as The FIFA Ballon d’Or – have been announced.

Argentina’s Lionel Messi is expected to win the award for the third year in a row, having beaten his Barcelona team mates Xavi and Andres Iniesta last year. In total there are 8 Barcelona players on the 23-man shortlist.

Nominees for the Coach of the Year award have also been unveiled. No great surprises there, although the presence of Arsenal manager, Arsene Wenger, may raise a few eyebrows. The Frenchman is the only person on the list who did not win a trophy last season, nor the previous five if we’re being really picky. Yet, his reputation remains undimmed, in FIFA circles at least.

FIFA announced another improved World Cup deal Tuesday after selling the rights to market corporate tickets at the 2018 and 2022 tournaments for $300 million to current partner MATCH Hospitality.

FIFA said it would also get a share of MATCH’s profits on high-end ticket sales for the 2018 World Cup in Russia, and Qatar in 2022. The deal also covers Confederations Cup and Women’s World Cup tournaments from 2017-23.

Shareholders in MATCH include Swiss marketing agency Infront Sports and Media, whose president and chief executive Philippe Blatter, is a nephew of FIFA President Sepp Blatter.

What are the chances?

The company made a reported loss of $50million on the 2010 World Cup in South Africa, but expects to return to profit in Brazil in 2014.

Uncle Sepp will be pleased. 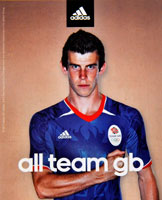 Vince Alm The chairman of the Football Supporters Federation Cymru has criticised the use of Wales midfielder Gareth Bale to promote a British Olympic team supporters’ shirt.

Welshman Bale has said he would like to represent Great Britain at next summer’s London Olympic. But the Football Association of Wales, fearful that a united Britain team could signal the end of an autonomous Wales international team, opposes its players featuring for Team GB at the London 2012 Olympics.

“I really think he [Bale] has been ill-advised,” Alm said of the player’s support for the GB team.

“This could be the end of the home unions and I think that would be sad.

“The players need to be made aware of it if they’ve got aspirations of Team GB. They need to be told what the consequences are if there is a Team GB.”

Well, considering FIFA has backed the creation of a British team for the 2012 Games and promised there will be no sanction if it includes non-English players, I think it safe to say that there will be no consequences.

Today’s effort comes from Ukraine, with Chernomorets 1-0 away win at Obolon, courtesy of Anatoliy Didenko’s looping curling shot from outside the box.

Stephen Keshi has confirmed that he has begun talks with the Nigerian Football Federation’s president Aminu Maigari on the vacant Nigeria coaching post.

Nigeria are looking for a new coach to replace Samson Siassia, fired last week after the Super Eagles’ failure to qualify for the 2012 African Cup of Nations.

Keshi was captain of the Nigeria side at the 1994 World Cup and played for his country at five different African Nations finals. He has enjoyed some success since turning to coaching, most notably leading Togo to the 2006 World Cup finals.

“Yes, I have been in talks with the president of the federation and as a professional, I will embrace the challenge, as I want to give my best to salvage the current situation,”Keshi was quoted as saying by KickOff.com.

“So if they ask me to take the job, I will do just that, but that has not been concluded yet,” he added.

Inter and Juventus have been fined for their fans’ behaviour during Saturday’s  game at the Giuseppe Meazza stadium.

Inter fans displayed a particularly tasteless banner which read: ‘Poor quality iron – nostalgia for Heysel’, a reference to the Heysel Stadium disaster in Belgium in 1985 where 39 Juventus fans died after a wall collapsed. The placard was also a response to the news that the Turin authorities have opened an investigation into the structure of the recently-opened Juventus Stadium.

Meanwhile, offered the chance to claim the moral high ground, Juventus fans failed spectacularly by directing racist chants towards an Inter player throughout the second half.

Three years on from his appointment at Camp Nou, and with 12 titles including three Liga crowns and two Champions League titles in the bag, Guardiola is already the club’s most successful coach.

Other possible milestones that could be passed tonight include Lionel Messi scoring his 200th goal for the club – he currently stands on 1999. Also, goalkeeper Victor Valdes can break Manuel Reina’s long-standing record of 824 minutes without conceding if he can keep out Plzen for 37 minutes.

Arsenal majority shareholder Stan Kroenke has spoken of his admiration for the Glazer family and their achievements at Manchester United.

The Glazers have been widely derided for the way they funded their buyout of United by taking money out of the club. But the Arsenal chief cannot understand criticism of owners who have combined sporting success with increased commercial revenue.

“What was so tough about the Glazers’ situation?” Kroenke said. “They won. And they have increased revenues by a huge amount. If I was a fan of that club, I would sit there and go, ‘Wow.’ Because how could you do it any better? That’s what I would say.”

Kroenke concedes there is a different philosophy in American sport to that found in Britain, where sporting institutions are not traditionally regarded as money-making ventures. In fact, barring a few notable exceptions, investment in English football clubs is usually seen as a quickest route to squandering a fortune.

“Because in the States you would never get this dialogue. ‘He took money out of the club.’ So what? Jerry Buss [the owner of the Los Angeles Lakers basketball team] takes money out of the club. A lot of owners in the US do. No one ever says anything about it. What it’s about, in fairness [is] … did the Lakers win anything? Well, yeah. They did. How big’s their revenue? Pretty darn good.”

In fairness to Kroenke, it would be wrong to portray him as someone who obsesses about the commercial aspect of the game.

Kroenke told reporters: “Would I rather be successful spending less or spending more? What’s the question! Anybody who is a sportsman would rather compete on the basis of intellect and cleverness rather than being able to throw money against the wall.

“Anyone can go and buy a player, but it takes a lot more to identify that player, develop that player and position him.”

The club sent scouts to Brazil last month to monitor Ronaldinho and other Brazilian players, and they hope to begin negotiations with the player himself before they return to Japan next week.

It’s unlikely the Brazilian would come to Japan purely for the love of it, so any deal would not come cheap.

“We expect that we would make the money back in the first few matches,” said the same source.

If making money is their main concern, it’s a surprise that David Beckham is not on their radar.

Jaguares de Chiapas, a Mexican First Division side, have become the first club to replace names on players’ shirts’with their Twitter handles.

Pictures and further details of the new look can be seen here.

La Liga side Valencia had already done something similar last month. In the absence of a sponsor, the club had used its own Twitter name on the front of players’ shirts.

Unlike the Spanish outfit though, Los Jaguares’ shirts also incorporates the club sponsors.