In the eagerly-awaited battle of the planetary sized egos at Ajax, Johan Cruyff may have shot himself in the foot before hostilities have even begun. The Dutch legend reportedly told Edgar Davids he had only been promoted to the board at Ajax because he was black.

Louis van Gaal, who was recently appointed as the club’s technical director and who famously doesn’t get on with Cruyff, will be rubbing his hands with glee at the developments.

Board member Steven ten Have has confirmed that the comments were made by Cruyff, saying: “Edgar has been insulted and has received shocking treatment. Sometimes, within the supervisory board, people cross the line and there have been racist comments.”

Cruyff has strongly denied the allegation and highlighted his own non-racist credentials.

“My foundation now has some 120 football pitches laid out for children, a lot of them immigrants,” Cruyff said of his work on behalf of disabled and underprivileged youngsters.

“We live in a multicultural society. They discredit themselves with this. I have a broad back … It is really too much to respond.”

Cruyff is also alleged to have told Marjan Olfers she was ‘only on the board because she’s a woman’.

David Beckham has said that he and his family plan to relocate permanently to the United States after his playing career is over.

There goes the knighthood David.

The English midfielder has still not decided whether he’ll stay with LA Galaxy for one more season or switch to French side Paris St Germain, but either way, he will eventually return to live in the States.

“We have had such a great five years here,” Beckham said. “We plan on keeping our house here and spending the majority of our time here as a family. It is a great place for our children to grow up. We have been treated so well in this country, so we won’t be getting rid of our house.

“When you live in California the weather is amazing every single day. For our children to be able to go to school and come home and go to the beach or jump in the pool, you don’t get that many places in the world. The whole friendliness of everybody – it has been very laid back. We get a certain amount of privacy with certain things we do in the U.S., that has been very nice to have.”

Mohammad Ali Ghuloom, a goalkeeper for the United Arab Emirates club Baniyas, has told The National newspaper about being ambushed by 20 men wielding knives and swords, following a row about seating between the men and a family at a cinema in Mirdif City Center in Dubai.

Ghuloom said he saw some young men trying to attack a man. No one in the mall was helping, so he intervened and asked the group of young men to leave the couple alone.

He alleged that the men then turned on him. One of the men was “carrying a white sword”.

“I was beaten on the head and hand and it required some stitches, too,” said the goalkeeper.

Ghuloom said the injuries that kept him out of Friday’s match against Sharjah. Three men have been detained over the attack, police said.

FIFA president Sepp Blatter has again urged Major League Soccer to bring its regular season schedule into line with the FIFA calendar, saying “it would be better for US Soccer” for the domestic league to align itself with Europe’s schedule.

“If [US Soccer has] the courage to change, they will do it, they told me,” Blatter disclosed to FOX Soccer’s Eric Wynalda in an interview.

“But they need some time to change that – to adapt to the international calendar. It means to the European calendar.

Blatter does make a good point when he says the current set-up results in many of America’s internationals playing in Europe, which ultimately undermines the credibility of MLS.

“Now there’s a situation that the best players, and practically the whole national team, they are playing in Europe. And this is not good for American sports. Because the American sport, they want to have their heroes at home. And therefore, this is, I would say, this is very instrumental.”

Nice work if you can get it 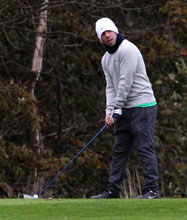 The latest news from depressed footballer Carlos Tevez is that he is still struggling to cope with the demands of being paid several million pounds a year to turn up for three hours training, five mornings a week. The striker demonstrated huge courage at the weekend in dragging his long-suffering body from bed to play in a golf tournament in Buenos Aires. Moreover,  showing remarkable inner strength and fortitude to overcome his personal demons, he ended up winning it!

Tevez, who returned to his homeland without City’s permission after being charged with misconduct following his refusal to warm-up against Bayern Munich in September, won a Buenos Aires Grand Prix for professionals and amateurs.

Sebastian Fernandez, one of Tevez’s partners in Sunday’s Grand Prix said: “He did not say anything about his problems with his club, but I was struck by the peace he had … He plays golf very well.”

Now that his regular day work has become somewhat erratic, he certainly gets enough practice.

Two people were killed and a young boy is in a coma after a stampede occurred in a Jakarta stadium for the Southeast Asian Games football final between Indonesia and Malaysia.

With the game sold out, tens of thousands of supporters gathered outside the stadium, but 5,000 police were unable to control the crowd when a gate was momentarily opened and there was a crush to get in.

“The two victims died when the stadium doors at section 15 opened and everyone rushed in,” Jakarta city police spokesman Baharudin Djafar told AFP.

Earlier on Monday, fans had gone on the rampage after the stadium was declared sold out. They burned down a ticket booth and besieged the media centre before they were chased away by riot police.

Tottenham moved up to 3rd in the Premier League after a comfortable 2-0 win over Aston Villa. Loan signing Emmanuel Adebayor opened the scoring with this overhead kick.

He promised he wouldn’t be going quietly and true to his word, Mohamed bin Hammam has asked sport’s highest court to overturn the life ban imposed by FIFA for alleged election bribery.

The Court of Arbitration for Sport has confirmed it has registered bin Hammam’s appeal. No date has been set for the hearing, but the Qatari will seek a verdict by next May, when the Asian Football Confederation would be legally bound to replace him as president.

FIFA expelled bin Hammam after he was found guilty of trying to bribe Caribbean voters during his election challenge to FIFA president Sepp Blatter. A subsequent appeal was dismissed, but undeterred, Bin Hammam said on Twitter that he would proceed to CAS “where from now on I will be equal to my rival.”

Banfield goalkeeper Cristian Lucchetti went down holding his ears from the explosions of two flares thrown from the home supporters early in the second half of his side’s trip to Estudiantes. That was enough for the referee to abandon the game with the visitors leading 1-0.

It must have been a deafening bang, because looking at the video footage the ‘explosion’ looks more like a whimper.

Here’s footage of Lucchetti rolling around the ground as if his eardrums have been perforated, while Estudiantes’ veteran midfielder Juan Sebastian Veron remonstrates with home supporters.

Sepp Blatter has extended the olive branch to FIFA’s Caribbean delegates by inviting them to an informal meeting.

“The CFU presidents will be invited … for an informal meeting with the FIFA president aimed at sorting out the issues and try to reconcile them,” FIFA said in a statement.

One things’s for sure it promises to be an intimate gathering In the past 6 months, Caribbean football has seen its top three elected officials – Jack Warner, Lisle Austin and Horace Burrell – either resign or be banned by FIFA. Moreover, 11 Caribbean officials have been banned for up to 26 months, five more have been reprimanded, while another six were warned about their conduct. Six officials including Warner, evaded justice by resigning all of their football positions.

It’s safe to say that they wouldn’t need any extra chairs for this particular meeting.