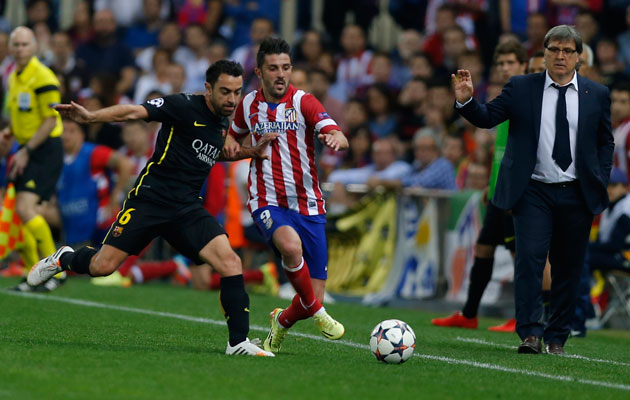 Barcelona skipper Xavi says his team “deserve” to win the Spanish title following a difficult season for the Catalan club off the pitch.

The reigning champions host leaders Atletico Madrid on Saturday needing victory to pip their opponents to the title.

“We have got a historic opportunity and now we cannot mess it up,” said Xavi.

“The league is over nine months and we have worked hard to get here. It has been a difficult year off the field but we deserve to win the league title.”

The idea that there should be a correlation between success on the pitch and problems off it, is one most would feel uncomfortable with. Not Xavi though, a man who describes himself as a ‘romantic’ and who sees a moral dimension to sport and in particular when applied to his revered Barcelona.

When he hangs up his boots there will be a job for life for Xavi at Barcelona. Not necessarily in a coaching capacity, but certainly as a cheerleader for the institution.

The bottom line, though, is that Atletico lead La Liga by three points, but a win for Barcelona will see La Liga title return to Camp Nou for the 5th in 6 years.

“Everything is in our favour now. We’re at home and the fans have to get behind us from the first whistle to the last,” added Xavi.

“We have got all the players, we have got the experience of what we have done over the years, we are hungry to win titles.”

Barcelona did not manage to score the opening goal in any of these five meetings and Xavi says an early home goal could be key in the title decider.

“We need to score first then Atletico might leave more space behind. We have to create more chances than we have previously, but it is difficult against them because they are the best defensive side in Europe,” said the 34-year-old Spain international.

Barcelona have been criticised this season for an unwillingness to deviate from their tried and trusted style of possession-based football, but Xavi insists that they will do whatever it takes to score on Saturday.

“We will try every way we can to score – shots outside of the box, get out wide – every type of way you can score in football,” he said.

Which, if true, will be most un-Barcelona-like in its simplicity, and will make a pleasant change from the increasingly jaded brand of tiki-taka we’ve become accustomed to in recent years.