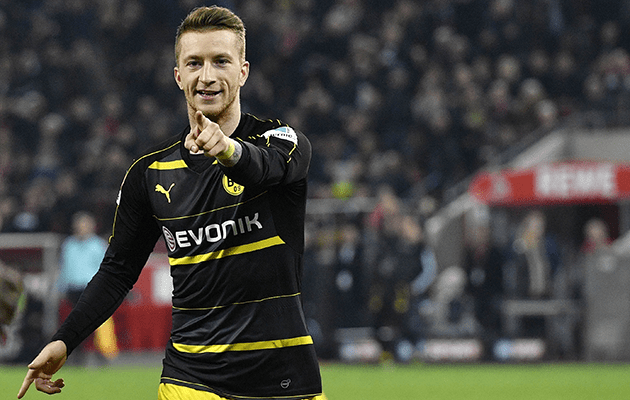 1. Call me Mr Last-Minute
After being sidelined for six months which a severe adductor muscle complaint, livewire Dortmund attacker, Marco Reus, certainly has come back with a bang.

Since returning to the Schwarz-Gelben squad late last month, the Ruhr Road Runner has either scored or created ten goals in five matches and this week proved the ultimate eleventh-hour lifesaver, netting late equalisers in both the 2-2 Champions League draw at Real Madrid – a result which ensured first-place in the group for his side – and 1-1 Bundesliga draw in Köln at the weekend.

So unfortunate with injuries throughout his career, Reus clearly is just delighted to be running wild again and if he can stay clear of the treatment room – and yes, it’s a big if – Dortmund can only benefit.

“I had serious doubts as to when and how he’d come back. Because of his goal-threat and personality, he cannot be replaced. That’s more obvious than ever. ”

Tuchel, whose team now has slipped to sixth in the table, would have been far less impressed with the overall effectiveness of his charges in the Rhineland. Sleepy, disjointed and most surprising of all, toothless going forward.

2. The Leipzig bubble bursts
No need for the Leipziger to panic or be downcast in the wake of their shock 1-0 loss at lowly Ingolstadt on Saturday, Just one defeat in 14 domestic league games this season is a feat the newly-promoted club should be immensely proud of and though no longer top of the Bundesliga pile, only trail Bayern Munich on goal-difference.

Clearly not wedded to the old maxim that you don’t criticise your players in public, RB coach, Ralph Hasenhüttl – who up until last summer was Ingolstadt’s inspirational boss – accused his young team of “allowing our opponents to force their game on us” and not being brave enough. A harsh verdict indeed.

Though not at their dynamic and fluent best, the Roten Bullen were outrageously dominant for long periods and with a touch more luck, would still be unbeaten.

Two key moments summed up their afternoon of futility. Referee Markus Schmidt failing to point the spot when RB forward Marcel Sabitzer was clattered by Almog Cohen in the second-half and Emil Forsberg missing a sitter a late on.

Fighting for their lives in the drop zone, Ingolstadt’s victory was the perfect smash-and-grab raid. Taking an early lead thanks to a Roger header. Then valiantly repelling the Leipziger. Zero marks for artistic appreciation; ten out of ten for spirit and organisation.

3. Thomas Müller awakes
Five o’ clock on Saturday evening was a moment of considerable significance for Bayern attacker, Thomas Müller, who after an
interminable run of 999 minutes without a Bundesliga goal, finally broke the log-jam in the 5-0 hammering of hapless Wolfsburg at the Allianz-Arena.

On hand 14 minutes from to deviate home a mishit Arjen Robben shot, Muller’s relief was plain for all to see and within seconds, a party atmosphere had developed. Teammates deliriously celebrating with him. And home crowd singing his praises.

“It wasn’t a brilliant goal, it was a little lucky that the ball came to me,” commented the German international whose last goal domestic league goal came back in April against Gladbach.

“It’s nice feeling, though it’s not a world-changing event. I’d been chasing this goal for a while, but I didn’t let myself go crazy about it.”

The end of Muller’s barren streak has much to do with the decision of Bayern coach, Carlo Ancelotti to switch from his favourite 4-3-3 system to a 4-2-3-1.

Rather than being hemmed in on the right-flank, Muller has been deployed on the shoulder of striker Robert Lewandowski for the last couple of weeks and clearly looks more at home there. So much more effective when arriving from deep, searching for space and linking with Lewandowski.

4. Slivers of hope at Darmstadt
Defeated in each of their last six league games, rock-bottom of the table and without a permanent coach after Norbert Meier was axed last week, Darmstadt is not exactly Fun City at the moment.

But at least they put in a much better performance in the 1-0 loss at Freiburg at the weekend, showing lots of enterprise going forward, standing firm at the back and arguably deserving a share of the spoils.

New Lilies caretaker boss, Ramon Berndroth, could turn out to be good news for Bundesliga beat reporters. He says what he thinks and did not hesitate post-match to point the finger at certain uncommitted players: “We were not a complete team. We’ve some backstabbers in the camp. I’ll be addressing that internally.”

5. VW: a diesel-fuelled sacking
In a sure sign that the panic button has been activated at free-falling Wolfsburg, the club’s Volkswagen backers have moved to oust high-profile managing director, Klaus Allofs.

In four years in the ‘Autostadt‘, the former West German striker did an an enormous amount of good, assembling a squad competitive enough to finish second in the Bundesliga in 2014-15, win the DFB Cup the same season and reach the Champions League quarter-finals last spring. However even the best have a shelf-life and the evidence of Allofs’ last three transfer windows is damning, with expensive signings such as wide-man Andre Schurrle, attacking midfielder Julian Draxler and striker Max Kruse all failing to deliver.

Wolfsburg received scant return on the 80 million euros they invested in those three and in the case of Draxler, paid a fortune (36 million euros) for a pro who never really wanted to be there, regularly lacklustre and publicly demanding to leave this summer.

Dropped from the squad which travelled to Bayern at the weekend, Draxler probably has played his last game for the Wolves and by January, will be gone. Destination: North London or Italy.