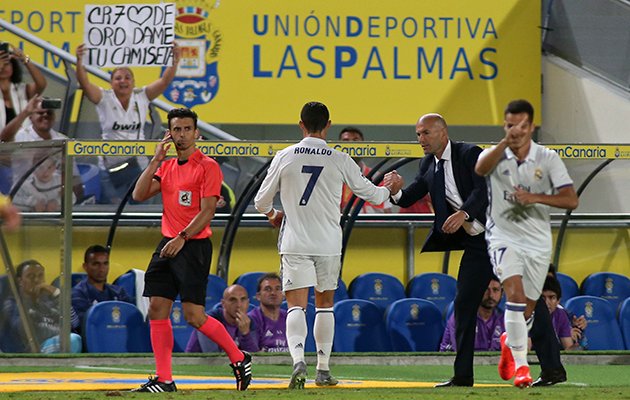 Borussia Dortmund sent Real Madrid a tweet at the weekend. “You’re having a hard time playing teams that wear yellow, do you @realmadriden,” it said, in English and in German. At the end of the message was a little winking smiley alongside.

Some got their knickers in a terrible twist, their skin as thin as their desire to stir up a controversy out of nothing is huge. There’s a trend in the media here – some fans, too – to spend all day looking for something to rant and rave and fight about, any chance to play the poor offended victim given the excuse to attack back. “Passive aggressive” doesn’t even get close.

Most saw it for what it was, at least. And Dortmund were right, of course. Madrid’s sixteen game winning running run came to an end with a 1-1 draw against Villarreal in midweek; three days later, they drew again, this time 2-2 at Las Palmas. They both play in yellow.

Four points dropped in three days. Not that anyone was panicking: “every cloud has a silver lining,” Gareth Bale said. The silver lining being that they’re still top, even if those two draws did reduce their lead to just one point. “On another day, we might have scored three or four,” Bale added. He, like his team, had a point: this was a better performance than against Villarreal three days before.

When Cristiano Ronaldo was taken off, departing annoyed – something which has dominated the agenda since – it was designed to give him a rest not least because it seemed like the game was won; Madrid were 2-1 up and seemingly in control. Only for Araujo to get a late equaliser, the ball bouncing back off the goalkeeper Kiko Casilla and reaching the goal-line.

And so it was: two yellow teams, two draws, two disappointing results. Next up: Borussia Dortmund, who also play in yellow. You might have noticed that. Smiley, winking face and all that.

Six weeks in and no league in Europe looks like this. “The league in a hanky” as one headline put it. Close together, in other words. Madrid’s lead is just one point over Barcelona and their lead over Atlético is also one. Atlético are level with Villarreal and Athletic Bilbao. Just four points separate the top eight. And Alavés, recently promoted, are s solitary point behind that. Yes, it’s early, just six games in. But the top three have all dropped points at least twice already. Not bad for an “uncompetitive” league.

It was a weekend of penalties. And stand-out ones, too. Pedro Leon took one of the worst spot kicks ever, thanks to a foot-planting-divot-raising-faux pas that lifted the ball like he was trying to score a conversion, not a penalty … popping it up and making him swing through and under with the other foot to send the ball sailing not just over the goal but over the wall behind it and in the building site beyond.

Then there was Aritz Aduriz, who scored a last minute penalty for Athletic Bilbao against Sevilla, beating Vicente Iborra. Iborra, the midfielder, that is. No outfield player forced to go in goal has ever saved a first division penalty, by the way.

One man who has – and more than anyone else is Valencia keeper Diego Alves, who this weekend took his total to 17, a new La Liga record, when he saved Alex Szymanowski’s penalty against Leganés. Not that Szymanowski should be too sad: he’s in good company, after all. Costa has saved penalties from Messi, Ronaldo, Costa, Rakitic and Kanouté. And most players who face him don’t score.

Alves has faced 43 penalties in Spain.

Only 21 have been scored.

He’s saved 20, seen one hit the post and another go wide.

His Granada side were defeated 3-1 at Alavés on Monday night leaving them second-bottom, level with Osasuna. “We made it too easy for them,” Jémez said and he was right: all three goals came with players running right through the middle, the defence not so much laying an offside trap as a red carpet.

Jemez was not impressed, and especially not with Omar Atzili, who he sent on at half time … and took off against 6 minutes later. “He wasn’t giving me what I wanted,” the manager said.

It was a very Jémez thing to do and so, and not the kind of thing that players like – the kind of thing he has been doing rather a lot already this season, talking up the crisis and hitting out often. Nor is he giving the fans what they want either: that’s six games, no wins.