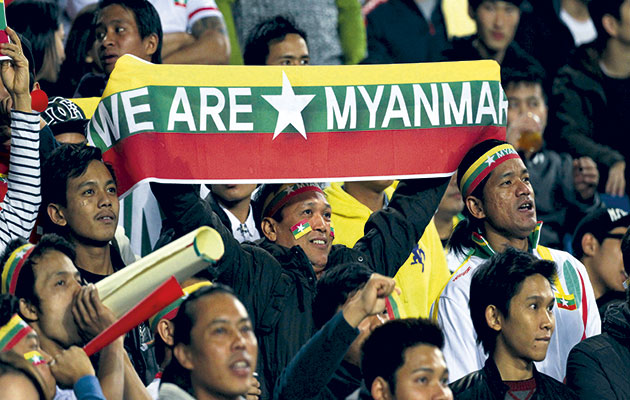 As the reclusive Asian nation of Myanmar edges towards political respectability, football is also recovering. But with that comes growing pains. When the country was still known as Burma, the “White Angels” reached the Asian Cup Final in 1968 and qualified for the 1972 Olympic tournament. But progress dissipated as a military junta, which seized control in 1962, exerted increasing power over all aspects of society.

After international outrage over human rights abuses, gradual liberalisation saw a handover to a nominally civilian government in 2011, and elections in November saw Aung San Suu Kyi’s opposition party, the National League for Democracy, win an absolute majority in both houses of the Assembly, possibly paving the way to democracy.

These days, half the MNL clubs have their own stadiums and 2015 champions Yangon use a 3G artificial pitch. Attendance levels, however, are poor, and while inaugural champions Yadanarbon are well supported – and Kanbawza claim crowds of 6,700  – the league average is around 500.

“The dwindling crowds, especially for the matches in Yangon, must be of concern,” says Malaysian coach PN Sinvaj, who first came to Myanmar in 2010 and this summer coached Hanthawaddy United.

“The MNL has introduced many new initiatives to spark interest in the league which are commendable. Clubs, however, must take their own initiatives so that the community can identify with the teams.”

Since liberalisation, companies and local businessmen control clubs, but presidents signing players without the knowledge of the club’s coach is common. According to MNL regulations, players must be full-time and the Myanmar Football Federation (MFF) allows clubs to recruit up to four from overseas, including one from Asia.

Initially this prompted a surge of agents looking to cash in and some players were on up to $10,000 a month according to Dave Booth, a much-travelled Englishman who was the national coach from 2000 to 2003. “It’s certainly opened up and local players now can compete regularly with foreign players, play at a higher level and receive decent salaries,” says Booth.

Trebol’s deals brought Croatian striker Tihomir Zivkovic from Montenegro to first Kanbawza and then Zwekapin United – where he was joined by another client, Japanese striker Atsushi Yonewaza from Indonesia’s Persiba Bantul. Both are on around $3,000 per month and that fall in wages has hit standards.

“The level of football dished out appears to have fallen from the 2010-2012 years,” says Sinvaj. “Clubs are looking for cheaper options when engaging foreign players.

“Not many foreigners can entice fans to pay good money and watch them play.”

Most clubs provide accommodation for overseas players, while Zwekapin also put up and feed local players, but conditions are not great, according to coach Kevin Reeves, who took charge of Zwekapin in February 2015.

“Accommodation is very basic,” he admits. “A large annex, no windows, very little light, camp beds, and, if they are lucky, a mosquito net.

“Their washing facilities are a small concrete or brick area under the trees, full of cold water which is not always fresh. They have access to electric for radio or laptop but no Wi-Fi. The only TV is where the reception area is, and the president’s office.”

After a Zwekapin player suffered a serious injury in Monywa, Reeves was confronted with medical facilities he describes as “the most distressing thing I’ve ever witnessed in my life”.

A former academy coach at Stoke City, he says the playing standard is comparable to League Two in England, adding: “The bigger teams, Yangon, Magwe, Yadanarbon, Kanbawza were slightly better. They had national team players, so you would expect it to a point.”

Reeves recently returned to the UK and says he will not return to Zwekapin, but he would go back to Myanmar. “The people are crazy about football but more for the national team,” he explains.

Myanmar’s success in qualifying for this summer’s Under-20 World Cup finals in New Zealand was yet another step in re-joining the international game. But a place at the senior event looks unlikely for now as the club game struggles to catch up with Asia’s more developed nations.