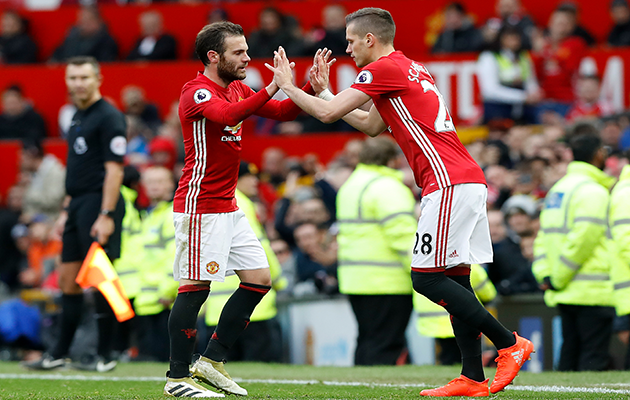 Everton have seen their £22m offer for Manchester United midfielder Morgan Schneiderlin accepted, but a £15m bid for Franck Kessié has been turned down by Atalanta.

United manager José Mourinho confirmed after last night’s EFL victory over Hull that the executive vice-chairman, Ed Woodward, had informed him Schneiderlin is on his way.

“Before the match Mr Woodward told me ‘almost there’, so I have ‘almost there’,” Mourinho said. “So I’m sad, I’m happy. I’m sad because I like him and he could be an option for us in a long season.

Atalanta’s Franck Kessié (right), seen here in action for Ivory Coast, has been the subject of a bid from Everton.

Meanwhile, the Premier League outfit face competition from Chelsea for Kessié, with the Italian side keen to hold on to the 20-year-old, who is currently on international duty with the Ivory Coast, before the Africa Cup of Nations until the end of the season.

Chelsea manager Antonio Conte is a big fan of the midfielder and club officials have been discussing whether to launch a formal bid, having indicated they would be willing to pay €25m (£21m) at the end of December.

Kessié, who spent last season on loan at Cesena but has become a key player this campaign. The 20-year-old has scored six goals in 16 appearances so far this season, as Atalanta have risen to the heady heights of sixth in Serie A.