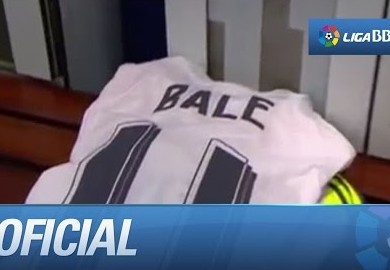 Gareth Bale says that he is currently enjoying his football at Real Madrid. His wonderful craft was on display yet again this past weekend after he notched a scintillating hattrick in front of the Bernabeu crowd.

Bale’s future has been subject to speculation following the departure of former manager Rafa Benitiz, with Manchester Utd reportedly keen on the Welshman. In an interview with The Telegraph Bale talked about his future and said that he denied that he is trying to make a statement to Zidane with his hattrick.

Bale said: “I don’t feel I need to make a statement to anyone. I know what I’m capable of and I just want to keep enjoying my football and when I do that I play my best.

“I’m happy at the moment. Obviously you can never predict what happens in the future, but I’m enjoying my football at the moment so I’ll keep going.”

Bale said that “it was a big disappointment” to see Benitiz go and said they had a positive relationship. Benitez afforded Bale the license to roam the pitch to express himself in attack – something which Bale clearly enjoys.

He is currently going through a purple patch for Los Blancos this season and it seems that the chat Bale had with Zidane when he first started as manager indicates that Bale can continue to roam the pitch with freedom.

Bale said: “There have been comments in previous interviews where I’ve been ‘stuck on the right’ and maybe didn’t have that freedom, but now I’m able to come in and float around a bit as well. My main position would be on the right, obviously. I’m enjoying my football and my position very much.”

He continued: “My best position is being able to roam around the front and find weaknesses in their defence. Everybody knows where I like to play and what I like to do on the pitch so hopefully I can keep doing that.”

Bale added that he was happy to hear Zidane say that he would display “the same affection” to him, just as Benitez did.

“Obviously that was nice of him to say,” said Bale.

“We had a chat when he first came in. And no matter what, I’ll give 100 per cent on the football pitch.”