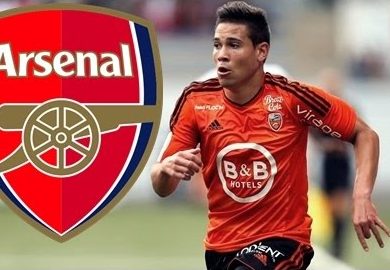 Liverpool and Borussia Dortmund are two out of four clubs that have made an offer for Raphael Guerreiro.

Guerreiro is a highly rated left-back and has attracted the attention of a host of big European clubs, including Arsenal, following a string of impressive performances for club side Lorient.

However Lorient will not budge in their efforts to keep one of their prized jewels, and it will take a big money offer to consider selling him, according to Lorient vice-president Alex Hayes, who has publicly said that none of four clubs have bid enough money for the 22-year-old.

“He will only be transferred if a club makes an offer that we can’t refuse. For the moment four major foreign clubs, including Dortmund and Liverpool, have made an offer.

“The fourth one shouldn’t take too long to be made [officially] but for the moment none of them satisfy us.

“We’re calm. We don’t need to sell to balance the books.”