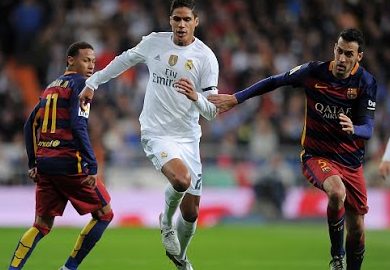 Raphael Varane has hinted at his unhappiness because of the lack of game time for Real Madrid.

Varane featured heavily for then manager Raphael Benitez, but has since been on the sidelines for Los Blancos.

He lost his place as first choice centre-back after he made some mistakes, to which he attests to.

“Until November I played nearly every game,” he told AFP.

“It’s also true that I made a few uncharacteristic mistakes but, over the whole of the season, you can’t fixate on this. There have been loads of positives.”

Varane also said that he would have liked to have featured in some more of Madrid’s important games, including the Champions League.

“It’s true that I would have liked to play the season’s decisive games, especially in the Champions League, but these are the manager’s decisions,” explained Varane.

A host of clubs would be interested in signing the technically Varane – particularly Manchester Utd and Arsenal who were reported to be after the defender when he was at French club Lens.

He continued: “After five years in Madrid I hope to be able to overcome some obstacles. I feel this is a crucial moment.

“I think a player has to develop and feel that they are important.

“I try to work hard every day and progress. I know the qualities I have and what I am capable of.”