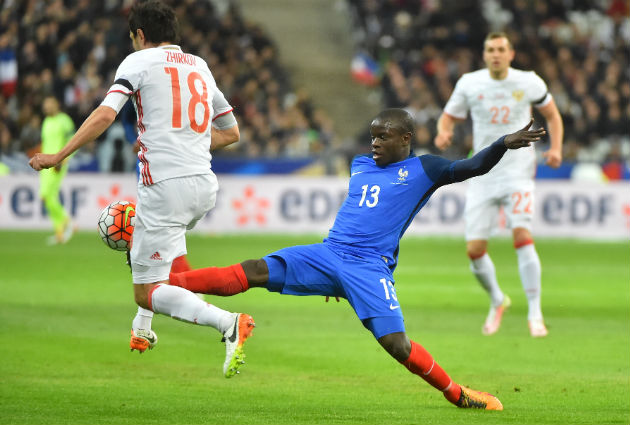 N’Golo Kante future at Leicester City is unclear after he did not say for sure whether he would be staying at the current Premier League leaders next season.

Kante has been in sensational form this season following a string of combative midfield displays and he has attracted interest from a host of top European clubs, including Arsenal, Chelsea and Juventus.

However the French international, who scored his first international goal on his 25th birthday last night, has refused to commit his long-term future at the club.

“I will fight for Leicester this season and next season we never know and we will see.

“At this moment I am focused on Leicester. We have to finish well this season but I don’t mind about [being linked with] the other clubs.”

Leicester could make history by winning the Premier League title for the first time in the club’s history and Kante, by his own admission, revealed how surprised he is by their league position:

“It is unbelievable because we weren’t thinking about this at the start of the season.”

He added: “All things are good and we are happy.”

Despite being title favourites, Kante was taking nothing for granted and urged for commitment and focus during Leicester’s final seven games this season:

“We will fight for the title but it is not [our] due. We have to fight in every game. There are seven games left. We hope to win the league but it’s not finished.”

Kante made his international debut on Friday against the Netherlands, before starting for the first time against Russia last night, and Manager Didier Deschamps was full of praise for his midfielder.

He said: “He is a little chap who is always smiling. The squad have done everything to help him settle in and he has shown no complexes out on the field.”

Deschamps added: “It is not easy on your first start but he did some very good things. It is interesting. It doesn’t mean those who didn’t play don’t have qualities, but he has carried on at international level what he has been doing with his club.”