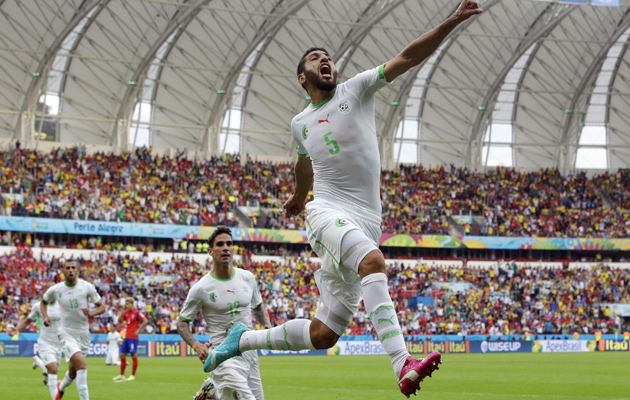 Match overview: Algeria put themselves on the brink of the last 16 with a powerful display against South Korea Porto Alegre. The North Africans combined pace, power and precision to go 3-0 up by half-time. South Koreas briefly threatened a comeback, scoring early in the second half through poster-boy Son Heung-min, but Algeria held on, scoring a well-worked fourth before Korea grabbed another consolation.

Key moment: Algeria’s fourth goal, scored by Slimani after a clever passing move with the scores at 3-1, killed off any chance of a Korean comeback.

Man of the match:  Islam Slimani scored a wonderful fourth goal for Algeria, exchanging passes with Feghouli before firing home, that capped a terrific performance.

Talking point: Algeria failed to score a single goal in their three goals at the 2010 World Cup but have now scored five in two games in 2014. Four years on from their failure in South Africa, a new generation of Algerian players, led by Slimani and  Feghouli, have made huge progress and are now a point away from the last 16.