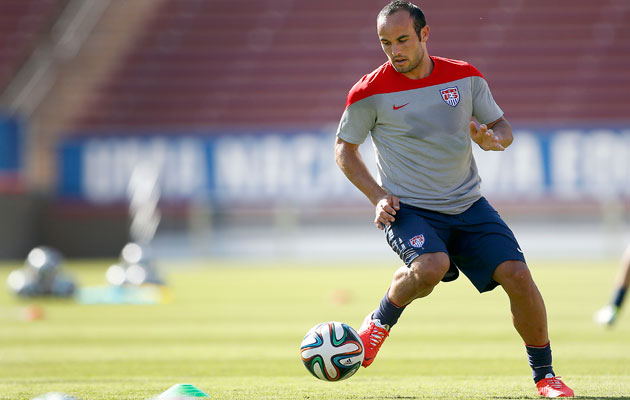 The 32-year-old, who has 156 international caps, and a USA record 57 goals to his name, has been left out by the German-born coach.

It means Donovan will not get the chance to play in his fourth World Cup – a record that would have put him alongside Pele and Bobby Charlton.

Donovan’s omission overshadowed the announcement of the final USA squad. Despite Klinsmann repeatedly insisting that Donovan was not guaranteed a spot, it was still widely expected that he would be named among the final squad of 23.

Shortly after the announcement of his squad, Klinsmann released the following statement:

“This is certainly one of the toughest decisions — the toughest decision in my coaching career – to tell a player like him with everything he’s done and what he represents, to tell him that you’re not part of those 23 right now,” Klinsmann said in a video released Thursday by US Soccer. “I just see some other players slightly ahead of him.”

“The last 10 days he did everything right,” Klinsmann said of Donovan’s performance in training camp. “He was always positive, he took it the best way possible. So his disappointment is huge. I totally understand that. He took it very professional, because he’s an outstanding professional player and he knows that I have the highest respect for him.

Donovan admitted he was disappointed to be left out, but said he would be cheering the team on in Brazil.

“It has been an honor and privilege to have represented the US National Team in three World Cups,” he said. “I was looking forward to playing in Brazil and, as you can imagine, I am very disappointed with today’s decision. Regardless, I will be cheering on my friends and teammates this summer, and I remain committed to helping grow soccer in the US in the years to come.”

The USA face an extremely tough draw in Brazil, sharing Group G with Germany, Portugal and Ghana. Their opening game is against Ghana on 16 June in Natal.