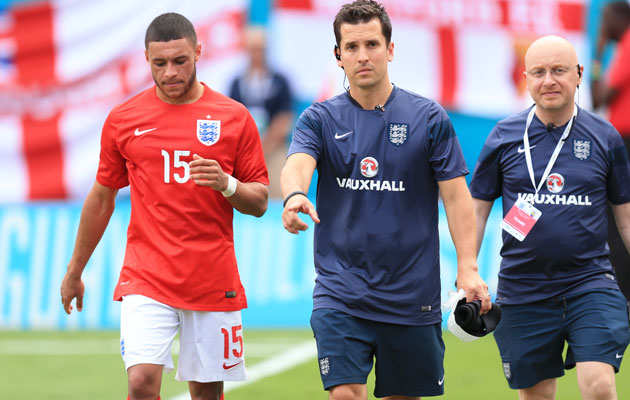 Alex Oxlade-Chamberlain’s World Cup participation is in jeopardy after a scan showed the knee injury he suffered in England’s 2-2 draw against Ecuador will keep him sidelined for up to 3 weeks.

Results of the scan confirmed that the Arsenal midfielder will be out for a minimum of 10 days and a maximum of 21. That means he will definitely miss England’s opening match against Italy on June 12 and possibly the entire group stages.

England have yet to decide whether to replace him, or indeed, with whom.

John Stones, the Everton centre-half, who is in Miami but not a member of the official 23-man squad, could be retained. Or, England manager Roy Hodgson could call up Michael Carrick and Tom Cleverley, both of whom are on the stand-by list.

In the wake of Oxlade-Chamberlain’s injury Hodgson admitted he was concerned about the loss of the player.

“It’s obviously too close to the incident but we did see that his knee buckled when the player tumbled into him,” said Hodgson.

“We have our fears there may be some ligament damage but we won’t know until he has a scan.”

The England coach also confirmed Jack Wilshere and Luke Shaw, who were replaced during the second half, were taken off as a precaution.

“It was cramp. We took them off for those reasons alone,” he added.

In what turned out to be an eventful and keenly contested 2-2 draw, Hodgson also admitted he was disappointed to see Raheem Sterling and Antonio Valencia sent off after a clash late on.

“I’m disappointed,” he said. “I thought it was a fierce challenge from young Raheem, not a foul challenge. He played the ball and accelerated into the ball.

“I’m disappointed with Antonio’s reaction, grabbing the player. Had he not jumped up there wouldn’t have been a problem but, when he does that, the referee had to deal with that and sent Raheem off. I’m pleased Raheem didn’t react to a lot of people milling around him.

“Jack had been on the receiving end a few minutes early from a very similar challenge from an Ecuadorian player and did not react.”