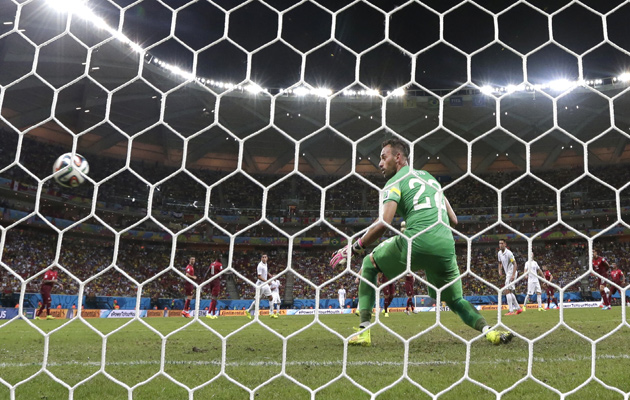 Match overview: Another dramatic game at this incredible World Cup. Portugal looked to be heading out of the World Cup but gave themselves a lifeline when substitute Silvestre Varela headed home late in second-half stoppage time.

Portugal had taken an early lead in Manaus when Nani pounced on a defensive error in the fifth minute. USA recovered from the early setback, although they needed keeper Tim Howard to deny Portugal’s Eder just before half-time.

Portugal improved with the half-time introduction of William Carvalho but USA equalised with a powerful shot from Jermaine Jones and then Clint Dempsey grabbed what looked like the winning goal with minutes remaining. But Portugal had other ideas.

Key moment: The last-gasp equaliser from substitute Varela in the final seconds of the game. Varela was a second-half substitute for midfielder Raul Meireles as Portugal chased the goals needed to stay in the competition. With seconds of injury time remaining he ran in to head Cristiano Ronaldo’s perfectly-placed cross.

Man of the match: Midfielder Jermaine Jones again helped the USA to be a team who are greater than the sum of their parts.

Talking point: All four teams in Group G are still in contention to reach the last 16. Much attention will now focus on the relationship between USA coach Jurgen Klinsmann and his former assistant Joachim Low, the coach of Germany, USA’s opponents next Thursday. A draw will be enough to send both teams into the knockout stage, at the expense of Portugal and Ghana.  Some of us are old enough to remember Germany and Austria in 1982.