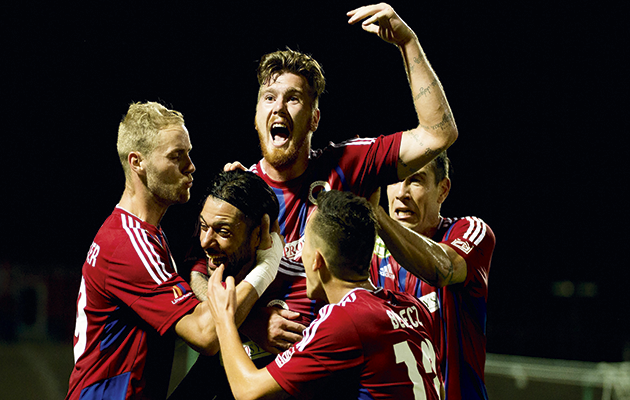 Tenth in the league last season, little was expected of Vasas this term. But with a quarter of the current campaign gone, they sit five points clear of the pack and have beaten Ferencvaros, Videoton and MTK Budapest – all away from home.

In his first foreign posting, German coach Michael Oenning has defied expectations with an inexperienced squad made up of players barely out of Hungary’s various academies, including his club’s own.

“These young players are so willing to learn,” says Oenning. “They’re so keen to develop. When I arrived here halfway through last season, the aim was simply to stay in the top division.

“Having achieved that, we started this season with modest ambitions, but we’ve taken the game to the opposition.”

Fast on the attack, Oenning’s team is equally quick to fall back when needed, and they have impressed everyone by not only winning but also entertaining.

Oenning’s 3-4-3 with no spearhead and constant movement down the flanks requires young players who are willing to run for 90 minutes. The midfield of Donat Szivacski, Mate Vida, Zsombor Berecz and Szilveszter Hangya have an average age of 20, while goalkeeper Gergely Nagy is 22 and leading goalscorer Martin Adam is 21.

“Hungary can be proud of its academy system – and of what was achieved at Euro 2016,” says
Oenning, who extols the achievements of compatriot Bernd Storck in the national set-up. And like Hungary’s coach, he has a long-term vision for the task in hand.

“For me, the situation is like it was in Germany in 2000,” explains Oenning, who worked with Germany’s under-18s and under-20s after the country’s disastrous Euro 2000 showing.

“We started from the basics. We focused on our youngsters and gave them the chance to fulfil their potential. Ten years on, the Bundesliga and national side are full of players in their early 20s – and they’re still coming through.”

Since 2000, Oenning has worked at Borussia Monchengladbach, Wolfsburg, Bochum, Nuremberg and Hamburg.

“I had heard of Vasas, of course,” continues the 51-year-old. “As a kid I watched European matches on TV and Vasas were one of the great names from Hungary, along with Honved and Ferencvaros.”

Two of Hungary’s swashbuckling side from the 1966 World Cup were Vasas players – Kalman Meszoly and Janos Farkas – but the club hasn’t won the league since 1977. In the following 40 years, the team from Angyalfold in north Budapest barely put in a title challenge, but it has retained its loyal fan base and sense of community.

“I grew up close to Gelsenkirchen and I feel that same working-class environment here, the close ties between a club and its supporters,” adds Oenning.

There’s also a sense of trust between the coach and his young charges, one built up since last season’s winter break. “Most clubs here go to training camps in sunny Turkey,” says Oenning. “We spent our winter break in the snowy slopes of north Hungary. We generated a real team spirit and came back stronger in the spring.”

Communicating through his assistant Istvan Ferenczi, who played in Barnsley’s FA Cup run of 2008, Oenning’s side has been dubbed “the Hungarian Leicester” by the local press. But with tricky trips to Debrecen and local rivals Ujpest before the next winter break no one at Vasas is talking about following in the footsteps of the Foxes just yet.