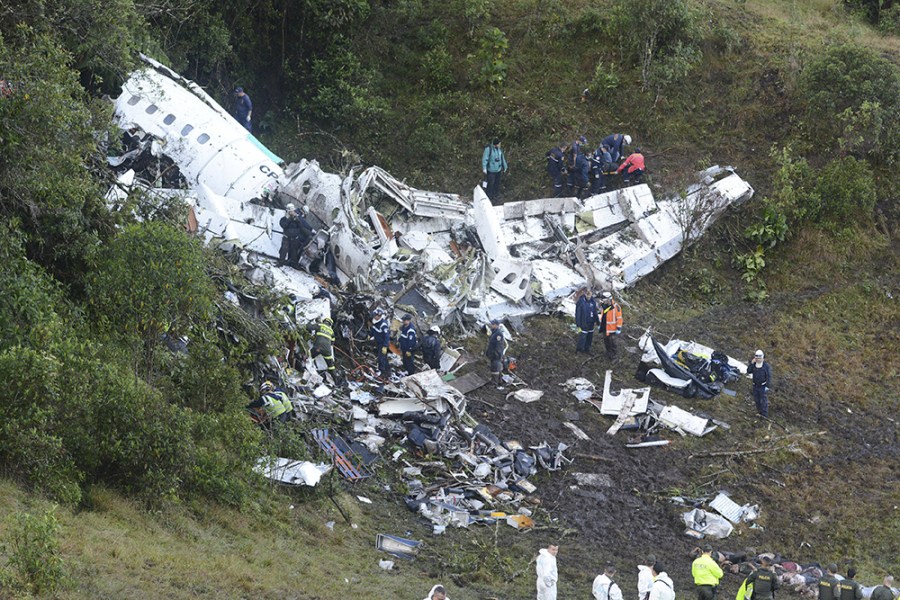 Brazilian football players, officials and journalists are believed dead after an aircraft carrying 81 people, including the Brazilian club Chapecoense, crashed overnight on the outskirts of Medellin.

Military sources in Colombia have suggested that only five people had survived the accident including three players – goalkeeper Danilo, Jackson Follmann and Alan Ruschel – one crew member and a journalist, Rafael Henzel.

ACF Chapecoense from the southern Brazilian state of Santa Catarina had been due to play the first leg of the Copa Sudamericana final against Atletico Nacional tomorrow evening. The competition is a South American equivalent of the Europa League ie, the continent’s No2 international club event. 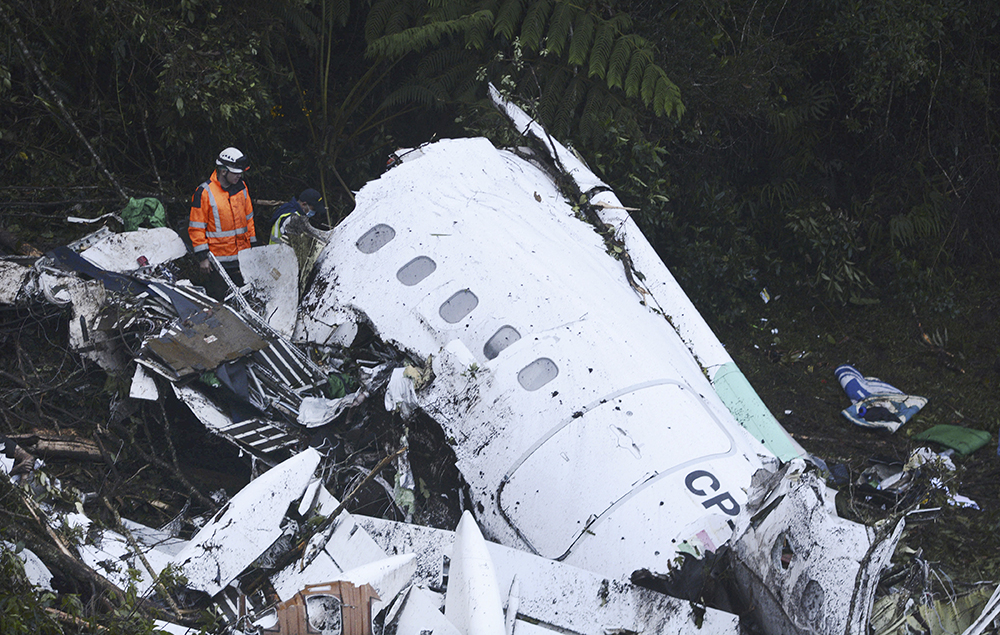 First reports said that the captain had reported an electrical problem before the plane, a British Aerospace 146, undertook two loops on its approach to Medellin before crashing in mountainous terrain which created immediate problems for rescue teams.

Officials from the Jose Maria Cordova airport in Rionegro, to which the plane had been headed, said it had been chartered from the Bolivian company LaMia.

The aircraft manifest for flight 2933 suggested that the 17-year-old plane’s passengers included 40 players and officials and 21 journalists in addition to the nine-person flight crew. It was on the last of three legs of the flight from Sao Paulo to Santa Cruz de la Sierra (Bolivia) and on towards Medellin.

The mayor from the city of La Ceja, close to the crash site, said the plane had not exploded or caught fire, increasing hopes for finding more survivors.

ACF Chapecoense have provided an uplifting ‘Cinderella’ story in a difficult decade for Brazilian football with multiple scandal and corruption allegations and the historic World Cup semi-final failure in 2014.

The club come from the city of Chapecó in the southern state of Santa Catarina which had never previously figured seriously among the rich and powerful of the Brazilian game. Now they rank among the five main clubs from Santa Catarina along with Avai, Criciuma, Figueirense and Joinville.

ACF were founded in 1973, from a merger of local rivals Atlético Chapecoense and Independente, and won the first of their four state titles in 1977. They were promoted into the top division of the national championship in 2014 and are currently ninth.

This was their second foray into international competition. Last year they lost in the Copa Sudamericana quarter-finals to River Plate of Argentina. This year, however, they progressed to the final by defeating Argentina’s San Lorenzo de Almagro on the away goals rule in the semis. 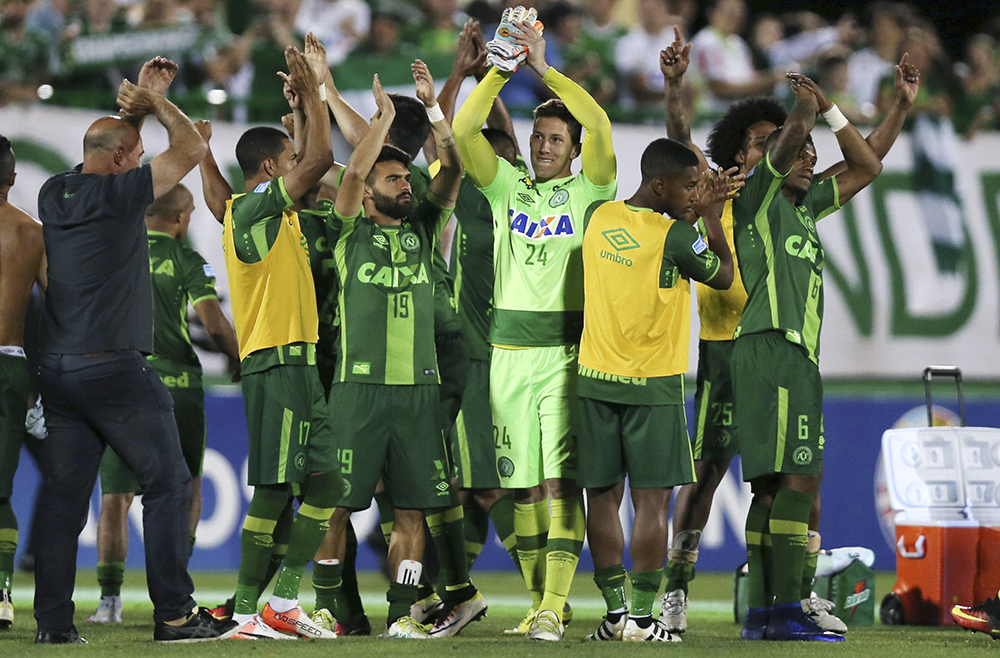 FILE PHOTO – Players of Chapecoense celebrate after their match against San Lorenzo at the Arena Conda stadium in Chapeco, Brazil, November 23, 2016. An aircraft with 81 people aboard, including Brazilian football team Chapecoense, crashed in central Colombia, the country’s civil aviation association said on its website on November 29, 2016. REUTERS/Paulo Whitaker/File Photo
Picture Supplied by Action Images

**The escalation in the number and intensity of international football club competitions and exhibition friendlies has brought flight tragedies in its wake.

In 1949 the 18-strong squad of Italian champions Torino were among the 31 dead after their plane crashed into the walls of the Superga basilica above Turin on their return from a testimonial match against Benfica in Lisbon;

In 1958 eight Manchester United players – the so-called ‘Busby Babes’ – were among the 23 people who died after their charter plane crashed on take-off in Munich after a refuelling stop on their return home from a European Champions Cup quarter-final against Red Star in Belgrade;

In 1961 eight players from the Chilean club Green Cross were killed in a crash in the Andes; the remains of the plane were not found until 10 ten days after the accident;

In 1969 some 17 players from Bolivia’s The Strongest, 11-times national champions, were among the 78 victims of a crash in Viloco, Bolivia, on the club’s return from a friendly match in Santa Cruz;

In 1979 the 14-strong squad of Soviet top division club Pakhtakor Tashkent, from Uzbekistan, died in a plane crash in Dniprodzerzhynsk which claimed 178 lives;

In 1987 some 16 players of top Peruvian club Alianza were among 43 people who lost their lives when their plane crashed into the sea near Lima;

In 1993 the 18 members of the Zambian national team squad were among 30 dead when their flight came down in Gabon on the way to a World Cup qualifying tie in Senegal.

On November 29, 2016, some players and officials from Brazilian club ACF Chapecoense are feared to have died in a plane crash in Colombia ahead of a Copa Sudamericana final first leg against Atletico Nacional of Medellin.