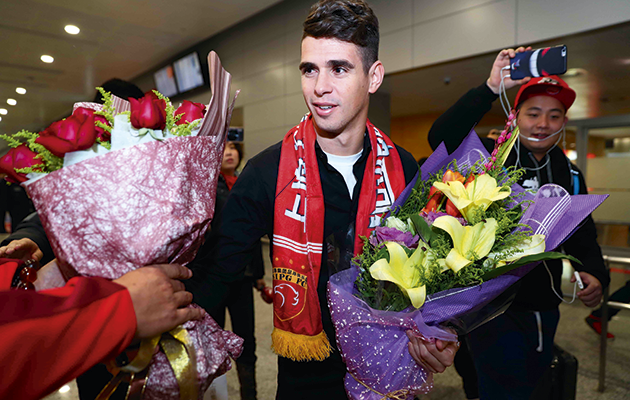 The Chinese Super League has been going since 2004 and it would be safe to say that it has had something of a chequered past but, from shady beginning when betting scandals were commonplace, it is now flexing its muscles on the world stage.

Several high-profile defections to the Far East and many more players being linked have thrust the organisation into the spotlight and it may well be that a few European clubs might start to worry about losing their top talent.

There is clearly a great deal of cash floating around attracting players, or agents, to the region but the league’s decision to restrict the number of foreigners on the books of a club is to their credit.

The sight of English Premier League clubs fielding 11 foreigners on a Saturday afternoon has never sat well with the footballing establishment and China is determined not to follow suit as they look to champion local talent.

The current rule states that clubs are allowed to register seven foreign players per season but are only permitted to have five signed up at any one time.

And the 16 outfits can only field three overseas stars during any match, while at least two domestic players who are under the age of must be on the 18-man match day list with one in the starting line-up.

This shows a forward-looking approach but landing a few big-name stars is always going to help put bums on seats and a look at those currently plying their trade suggests they are leaning heavily on South America and, in particular, Brazil.

There are 24 Brazilians currently signed to Chinese Super League clubs, with former Chelsea stars Oscar and Ramires plus ex-Tottenham midfielder Paulinho a few of the more recognisable names.

While Major League Soccer in the USA has never been seen as a threat to the European game, with players who have long since celebrated their 30th birthday usually drifting over the Atlantic to extend their careers, its Chinese equivalent has more financial pull and may appear more attractive on the surface.

But dig a bit deeper and it is open to debate whether Premier League, La Liga or Bundesliga regulars will want to up sticks and play in an unfamiliar environment when they could still be earning huge sums while challenging for domestic and European titles with their present clubs.

Chelsea striker Diego Costa has long been linked with a move eastwards and, having revealed that the Blues no longer want him, speculation will increase that he will be the next man to chase the money.

The Spain international appears a passionate player who enjoys the battle of playing in Spain or England and it is questionable as to whether he would get that buzz playing in a league that would be nowhere near as competitive.

That is not to say that the CSL is not of a decent standard and the South American influence has helped in that respect, but it would be a step backwards from what he has experienced over the past few years.

Betting on Chinese football is hugely popular and Bookmaker Advisor has all the information you need for the best offers available on the market. Whether its popularity will be limited to the far-east in the future as the CSL continues to develop however remains to be seen.

Wayne Rooney’s recent move back to Everton out paid to rumours that he was considering a lucrative transfer to the CSL. A move for England’s record goal scorer would have represented a huge coup for the league.

However, clubs might now struggle to do deals for players such as Costa or Rooney due to new legislation brought in by the Chinese Football Association.

Clearly ramping up their efforts to prevent clubs from ‘buying’ the title, they have introduced a new ‘100 per cent tax’.

This means that clubs posting a loss during the financial year would not only have to pay to purchase a player but then fork out the exact same amount which would go into a fund that helps the development of young Chinese players.

Therefore, Costa might cost a club £90m but, if their accounts were in the black, they would actually pay £180m, with the rule set to be introduced during June.

It seems inevitable this will prevent many of the clubs spending big on European talent and they might have to rely on free transfers, with huge pay packets as an incentive.

Whether the fans agree with the new rules is open to debate as they are unlikely to see the really top players in the league during their prime, but it is food for thought for other leagues around the world.

The Financial Fair Play Rules were supposed to put a cap on spending in the European game but huge transfer fees are still paid with clubs in massive amounts of debt.

Yearly turnover of the biggest teams can service any debt and there is no way that Uefa would follow the Chinese route but, once again, it is a radical plan by the CFA and one that will benefit the game in China.

China are desperate to be players on the world stage but have only once qualified for the World Cup – back in 2002 – and the hope is that money filters down to help in that respect and aid the development of young talent in the vast nation.

The Chinese Premier League may be a new kid on the block compared to the established European leagues but, after teething problems, they now seem to have a structure in place that is sustainable.

If they encounter problems then they invariably do something about it and, despite whiffs of former communist ideals, the latest initiative has been put in place for the good of the game.

Football is clearly on the up in the region and, while it will never compare to the European game in terms of prestige, it will be interesting to see how much it can grow and were it all ends up.