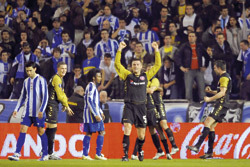 AaB Aalborg’s thrashing of Deportivo La Coruna in the UEFA Cup, suggests that better times might lie ahead for Danish football.

By Jim Holden
Reigning league champions AaB Aalborg gave Danish club football its best night since Brondby reached the semi-finals of the UEFA Cup way back in 1991 when they knocked out Deportivo La Coruna 6-1 on aggregate from this season’s competition.

AaB won 3-0 at home in the first leg and then 3-1 away in Spain to deliver an extraordinary start for new manager Magnus Pehrsson, the – little-known Swede who was a surprise choice for the job.

Critics had savaged AaB for the appointment of the 33-year-old, who had only one average season with Swedish club GAIS to his name. Moreover, the extremely popular caretaker coach Allan Kuhn had been unbeaten in 12 matches following the sacking of previous boss Bruce Rioch last autumn.

It did not seem a recipe for success, and there was also the fact AaB had not played a competitive match for more than two months due to Danish football’s winter hibernation. Deportivo were also on the rise in La Liga.

But Anders Due scored twice in the home leg, with a Michael Jakobsen penalty allowing Aalborg a strong lead for the return match. Three goals in eight magical minutes just before half time of the second leg ensured a fairytale triumph. On-loan Jamaica striker Luton Shelton scored the first, followed up by strikes from Andreas Johansson and Thomas Enevoldsen.

AaB goalkeeper Karim Zaza claimed the credit should go to Pehrsson, saying: “Tactically, he is a fantastic coach. Against Deportivo his tactics were a total success. The plan was for us to be compact on the pitch and stop them creating chances. Then we scored so many goals ourselves – and I bet not many people were expecting that.”

No, they weren’t. But it was a thrilling indication that standards are rising in the Superliga, a point emphasised by national coach Morten Olsen, who has also overseen a fine start to World Cup qualification.

“It was a fantastic performance in both legs by AaB,” said Olsen. “They were particularly good at dead-ball situations, which are so important in modern football. It’s wonderful for Danish football that one of our clubs can get such a good result and by playing so well. There was no luck about it. They have a real chance of beating Manchester City in the next round and reaching the quarter-finals.”

The prize for victory over the English Premier League club would not just be Aalborg’s. It would also ensure the Superliga receives an extra Champions League place for next season.

Manchester City had to overcome another Danish side, FC Copenhagen, to progress in the competition. Copenhagen lost 4-3 on aggregate, but their performance was another illustration of the improving strength of the Superliga, which resumed at the beginning of March.

Leaders Brondby started with a new manager following the arrival of Kent Nielsen from AC Horsens in a move arranged six months ago. There was no little irony that Nielsen had jumped from the club bottom of the Superliga to the one at the top.

It’s all set for a close battle for the title between Brondby, FC Copenhagen and OB Odense, with just four points separating the three at the restart.