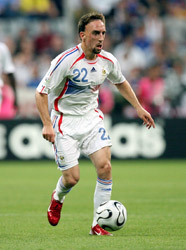 Arsenal are expected to sign Marseille and France midfielder Franck Ribery in a deal that is expected to cost the Gunners a minimum of £13.5m.

The player’s agent, Bruno Heiderscheid, confirmed on Sunday that “a transfer offer for Franck” would be “registered with [Marseille’s chairman] Pape Diouf within 24 or 48 hours.”

According to France Football, Arsenal are the club responsible for the offer.

The arrival of Ribery would almost certainly indicate that Wenger has decided to offload full-back Ashley Cole to Chelsea.

“I do not know what will happen with Ashley Cole in the next few days,” Wenger said yesterday.

“But for me, certainly, the deadline has come now to make a decision one way or the other. This week is the last limit I can expect something to happen. To play the football I love, I need the players who can play the game I love and until now we always managed to do that.

“We have one advantage in that we’ve never been a prisoner of names. There are many people who have predicted many times that we’ll collapse and we’ve always improved. I have in my squad good enough players no matter who leaves.”

Ribery’s arrival may also hasten the departure of Jose Antonio Reyes to Real Madrid. The Spaniard has made no secret of his desire to return to his homeland, and Real are known to be keen to sign him.

The Gunners may also use Cole’s transfer as leverage in their attempt to sign Chelsea’s William Gallas, although they will face stiff competition from Real for the French defender.

Gallas’s future at Stamford Bridge is unclear after he refused to join the Premiership champions on their pre-season United States tour.