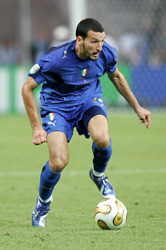 Barcelona have beaten off stiff competition to sign Juventus defenders Lilian Thuram and Gianluca Zambrotta following the Italian club’s relegation to Serie B.

Juventus were relegated and will start next season with a 30-point deduction after the match-fixing scandal which has engulfed Italian football in recent months.

Spanish reports suggest Barca have paid a combined fee of £13m, although the club did not divulge the fee paid.

Thuram, who has also had spells with Monaco and Parma, was part of the France squad which won the 1998 World Cup and Euro 2000.

He won 121 caps for France before finishing his international career after his country’s defeat to Italy on penalties in the final.

Zambrotta has 58 caps for Italy and was a key member of their World Cup winning side in Germany.

Both players have won four league titles with Juventus but their departure is part of a mass exodus from the club. Juventus lost Italy’s World Cup-winning captain Fabio Cannavaro and Brazil midfielder Emerson to Real Madrid on Wednesday, and further sales are expected in the coming weeks.