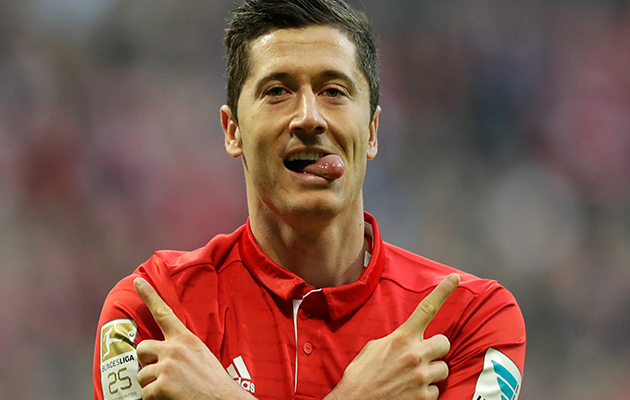 1. Bayern strain, struggle and pull through.
Crowned 2016-17 winter champions on Friday night thanks to a last-gasp 2-1 victory on the frozen turf of Freiburg, Carlo Ancelotti’s All-Stars
can take immense satisfaction from the way they refused to buckle in adverse circumstances.

Despite the pitch being unplayable in parts, the Bavarians looking decidedly rusty after a month without competition and conceding early on the night, Bayern still managed to side-step the would-be banana skin. This is what the strongest tend to do. Winning ugly on off-days.

Not for the first time, Bayern’s saviour was two-goal Polish striker, Robert Lewandowski, whose match-winning effort a minute into injury-time was a moment of sheer brilliance, expertly chesting down a Franck Ribery cross, flicking the ball up with his right-boot and firing home a volley with his left. A masterclass in technical virtuosity. Of creating space in the tightest  of spots.

“When the cross came in my first instinct was to head it on to a teammate but as no one was available, I went for it myself,” explained Lewandowski afterwards. “It was our last chance in the match and I had to do something. I got a shot off, aiming for the far-post. It wasn’t particularly well-struck, but a goal is a goal. Poor Freiburg, their hopes dashed at the death.”

That’s why Lewandowski plays for Bayern,” sighed coach, Christian Streich. “That’s why they win so often.”

2. New faces, new impetus.
The first set of fixtures of 2017 turned out to be a happy hunting ground or newly-arrived forwards, with none as prominent as Wolfsburg’s French winger, Paul-Georges Ntep.

Picked up from Breton side, Rennes, the Cameroon-born wide-man produced a Man of the Match recital in the 1-0 home victory over Hamburg, his pace, quick-feet and facility for the unexpected constantly stretching the opposition and laying on Mario Gomez’s late winner.

“We bought him (Ntep) because he’s the sort of player who provides unpredictability,” declared Wolves coach, Valerien Ismael.

Quite so. In the open spaces of the Bundesliga, the explosive PGN should have a field day.

Another dream debutant was Schalke striker, Guido Burgstaller, who came off the bench to net the only goal of the game in injury-time in Ingolstadt.

A prolific marksman for Nurnberg in the second division this season, the 27-year-old Austrian has plenty of rough edges to his game, though undoubtedly will offer the Royal Blues a great deal of physicality and punch at the point of attack.

With Dutch predator, Klaas-Jan Huntelaar slightly past his prime and young Swiss frontrunner Breel Embolo currently recovering from a fractured ankle, Burgstaller can look forward to plenty of game-time in the months ahead.

3. Alexander the Great
In further proof of Borussia Dortmund’s ability to attract the brightest and best young talent, the Westfalen outfit have completed the signing of Swedish boy wonder centre-forward, Alexander Isak from AIK Solna.

Dubbed the ‘new Ibrahimovic’ in his homeland, the 17-year-old had been extensively linked to Real Madrid, but clearly took a shine to the Dortmunder workshop of next generation excellence. The youngster has signed a five-and-a-half-year contract with the Schwarz-Gelben who will pay AIK a transfer fee in the region of nine million euros.

This is very much a period of change for up front for Dortmund. Colombian striker Adrian Ramos recently headed for the exit – signing for Chinese club, Chongqing Lifan but loaned until the end of the season to Granada in Spain – and by next summer, much-coveted marksman, Pierre-Emerick Aubameyang could be gone too.

Because of his African Cup of Nations commitments with Gabon, ‘Auba’ is temporarily out of the Bundesliga picture and in Saturday’s 2-1 win in Bremen, nominal wide-man Andre Schürrle had to lead the line, responding to the challenge with an early opener and generally  combining well with fellow attackers, Marco Reus and Christian Pulisic.

Schürrle, bought for 30 million euros from Wolfsburg in the summer, had an Autumn Championship to forget, rarely starting for Borussia and now must push on. Or be pushed out.

4. Mistakes, mishandling and mayhem.
Ironically for a country with very high standards between the posts, it was a weekend of crazy goalkeeping gaffes. A judgement short-circuit here. Intemperate behaviour there.

Exhibit A: the first-half dismissal of Bremen custodian Jaroslav Drobny for his wild foot-up, hip-high challenge on Dortmund’s Marco Reus.

Exhibit B: the unfathomable antics of Eintracht Frankfurt’s Lukas Hradecky, who only three minutes into Saturday’s game at RB Leipzig, lost all his bearings, handled outside the box and was ordered off.

A gift-wrapped present which RB promptly unwrapped, scoring from the resultant free-kick and going on to cruise to a comfortable 3-0 win. Thank you and goodnight. The recipient of the second-quickest red card in Bundesliga history, Hradecky was strangely unrepentant:  “I’ve apologised to everyone but it was a reflex and I’d do the same again. As a keeper, you don’t ever want to let in a goal. I had a decision to make. I could not let it go.”

5. Making plans for 2024
Nineteen years after they last hosted the European championships in 1988, the German federation officially has thrown its hat into the ring to stage the 2024 event.

At a meeting at the DFB last week, they voted unanimously to apply and given the country’s swanky stadia, economic strength, transport links and organisational flair, are bound to be the favourites to prevail. The choice of the ten stadia to be used will be announced in September of this year and in a nod to alleged German malpractice in the awarding of the 2006 World Cup, the bid is to be supervised by Transparency International, a global anti-corruption organisation.

All twelve of the World Cup 2006 venues will again be in contention. Other possible host cities are Düsseldorf and Mönchengladbach.