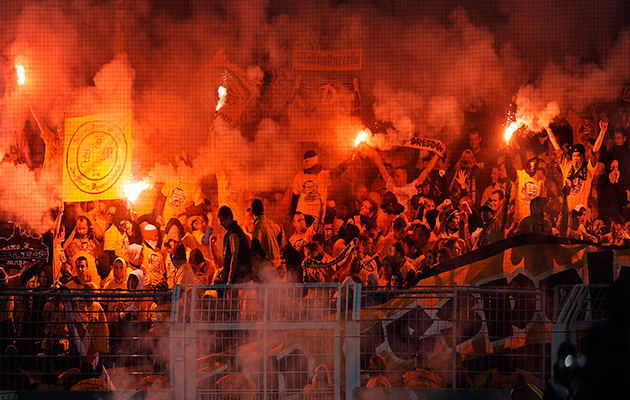 Dynamo Dresden have been fined €60,000 (£54,000) and will have parts of their stadium closed for one game after their fans threw a severed bull’s head near the pitch during a German Cup match against east German rivals RB Leipzig.

The German football association (DFB) confirmed on Tuesday that Dynamo, who were already on probation following incidents last season, had failed in their duties to protect the playing area in the August cup tie against RB Leipzig, who are nicknamed the Bulls.

Dresden fans threw a bull’s head on to the perimeter of the pitch, unfurled insulting banners and hit one player with a coin during their penalty shootout win.

Dynamo Dresden fans unfurled banners reading “you cannot buy tradition” and “No to RB” during their team’s Cup match against Red Bull Leipzig in August.

RB Leipzig enjoy the unwanted status of being Germany’s least liked club. Their rapid ascent through the ranks has not gone down well with fans of rival teams who accuse them of buying success and ignoring the principle whereby clubs in Germany are majority owned by supporters.

This is not the first time Dynamo has been punished, with the club having been suspended from the German Cup in the 2013-14 season because of crowd trouble.