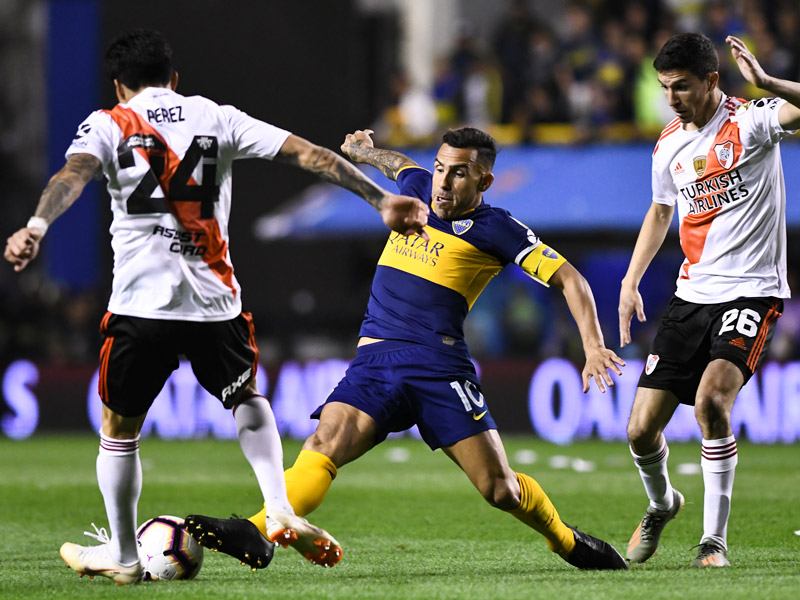 The grandstand finish to the Argentine season was nearly stillborn. Last Friday at half time in their penultimate game Boca Juniors were away to Colon and lucky to be on level terms. River Plate’s three point lead looked as it might become unassailable.

But in the second half Boca turned on the style and won 4-0. Twenty four hours later, River were nervy at home to Defensa y Justica. They went a goal down. In November they managed to throw away a Copa Libertadores final that had seemed to be in the bag. It may have left a trauma. A second half penalty brought them a draw – and means that they go into next weekend’s final round a single point ahead of their eternal rivals.

River travel north to take on Atletico Tucuman, a team who have gone nine games without a win. A River Plate victory will make sure of the title.  Any other result gives Boca the chance to overtake them. And to add drama to the occasion, Boca are at home to Gimnasia, battling hard against relegation under the command of the great Boca idol, Diego Armando Maradona.

There is only one way that the adrenalin count could possible get higher. If River lose and Boca draw then the twin giants will end the season level on points. Goal difference is not a factor. The rules call for an extra game on a neutral ground to decide the destiny of the title.

Fitting the big game in would be the problem. The rules state the match should take place within 72 hours. This cannot happen. In that timeframe both clubs will be in action in the Copa Libertadores. The group phase kicks off this week. On Tuesday Boca are in action in Venezuela against Caracas – without Carlos Tevez and Eduardo Salvio, who have been rested for the last round of the domestic season. A day later River are in Ecuador against Liga of Quito, where the temptation to rest players may well clash with the need to pick up points; a couple of suspensions mean that River will be playing their home group matches behind closed doors, and theirs is the only group to contain three former champions.

This leads on to a wider issue – the problems of Argentina’s calendar.

First, there is the awkward question of the number of teams included in the first division. The top flight was inflated to 30 teams, and is in the course of being reduced. The current number is 24.

The old first division had 20 clubs. The year was divided into two separate championships, in each of which the teams played each other once.  Twenty four teams is seen as too many for this, and also too many for a 46 round, home and away format. Instead the teams play each other once, in a clumsy format which stages 16 rounds between August and December and the last 7 after the high summer break.

But this only runs up to early March. And so another competition – the Superleague Cup – has to be invented to fill up the space until the end of May.

The defects of this are further amplified by the fact that Argentina is now out of sync with the rest of the continent.

The key year was 2017. Before then the continental competitions had been split up. The Libertadores, the Champions League equivalent, was squeezed into the first half of the year. The Sudamericana, a Europa League imitation, took place in the last few months. But from 2017, both have run all year round, starting in late January and coming to a conclusion in November. Up to this point there had been a split; for their domestic football some countries followed the European August-May model, others had a season which ran with the calendar year. Now everyone has switched to the latter – with the exception of Argentina.

This means that Argentina sorts out its continental qualifiers in May – when the Libertadores does not kick off in earnest until the following March. Given the speed of change in South American club football, this is hardly logical. An easy example – the Defensa y Justicia team which a year ago finished the 2018/9 league season in second place bears very little relation with the one about to make its Libertadores debut on Tuesday.