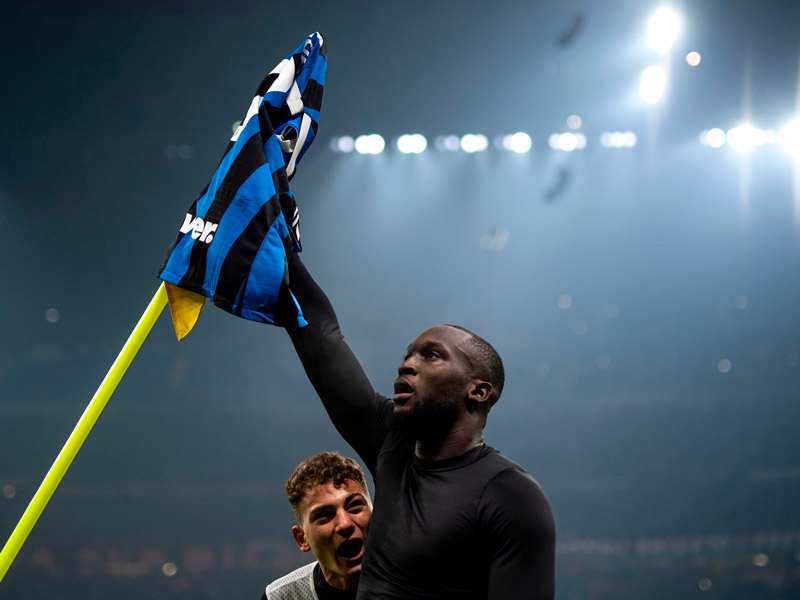 And we now have a contest, perhaps even a three way one. Inter’s epic Milan derby win on Sunday night, Lazio’s vital away win against Parma earlier that day and Juve’s 2-1 away loss to Verona on Saturday night have left us with the almost unthinkable, namely three clubs separated by just a point at the top of Serie A.

Inter and Juventus are joint top on 54 points, even if for the time being Inter’s superior goal difference put the Milanese side top of the table. Meanwhile, the unlikely pretenders, Lazio, are just one point behind their two rivals.

There was always the suspicion that the arrival of Antonio Conte at Inter might finally present Juventus with a serious rival on the road to a ninth consecutive title. In recent times, however, three draws in their last five Serie A games had seemed to suggest (to this writer at least) that the Old Lady was about to slip away from them.

Oh ye of little faith. Sunday night’s 4-2 derby win against AC Milan in an intense, dramatic contest of fluctuating fortunes in the best derby tradition would most definitely suggest that Inter are not going to lie down without a fight. Where in recent seasons, the Old Lady has cruised home against such as Napoli and AS Roma, it could be that this time the Old Lady will have to watch her back down to the very last day, next May.

Of course, the reality is that the title contest is more alive than ever not so much because of the Inter and Lazio wins as because of the fact that Juventus lost to a side we would normally rate as a relegation battler. Twice in the last five seasons, Verona have been relegated to Serie B. Twice too, in that time, they have immediately won promotion back to Serie A.

They are expected to prove the canon fodder for the big-hitters of Serie A. Except that this season, they failed to read the screenplay for the newly promoted and currently sit sixth in the league on 39 points, five behind fifth placed AS Roma and currently in line for a Europa League birth.

Even the fact that it was Juventus who took the lead 20 minutes into the second half, through the redoubtable Ronaldo, did not knock them off their stride.   Two goals in the last 15 minutes, one from the former Liverpool, Sunderland and AC Milan striker, Fabio Borini and the other from former Inter and AC Milan striker, Giampaolo Pazzini, did the business for a Verona side that is nothing if not unfailingly determined and aggressive.

Verona have gone unbeaten in eight Serie A games since a 3-2 loss to Champions League contestants Atalanta at the beginning of November. Furthermore, they held Lazio to a 0-0 away draw in a rescheduled game just three days before their clash with Juventus. Clearly, they are no slouches.

Yet, many commentators have argued this weekend that this was more the game that Juventus lost rather than the one that Verona won. The view would seem to be that an honest old “banger” should not be passing out a well-oiled Ferrari.

Inevitably, many argue that more that halfway through the season, new coach Maurizio Sarri has failed to impose a clear and convincing style of play. Even Ronaldo’s tenth consecutive goal-scoring league game offers no comfort.

Whereas last season, Ronaldo seemed like the cherry on a very imposing Juventus cake, this season it looks like he is the cake, left to his own devices. This second defeat in three league games (the other was against Napoli) comes just two weeks before Juventus resume Champions League action with a second round tie against Lyon.

Such has been Juve’s dominance in Italy over the last decade that these unexpected recent setbacks prompt endless speculation. It could be that against Verona not all Juventus minds were as motivated and focussed as they might have been. That may be but we suspect that the recall to Champions League arms will see a different Juventus. In the meantime, we can be grateful that the league title race is suddenly on again.

And if it is on again, we owe that to Inter’s remarkable derby win. For, even if Lazio are just a point away, we do not really expect them to last it out through to May. In contrast, though, Inter have fashioned a strong squad, one that they strengthened during the January transfer window with three Premier League players, namely Dane Christian Eriksen (Spurs), Nigerian Victor Moses (Chelsea) and Englishman Ashley Young (Man United).

There was much to like and equally much to dislike about Inter’s comeback from 0-2 down at halftime to run out eventual 4-2 winners. On the positive side, Inter showed a willingness to battle and an ability to cynically take their chances to get back into the game.

On the negative side, their first half showing when they were run ragged by an impressive AC Milan was too bad to be true. Then, too, it is arguable that Inter got back into the game with two goals in the first ten minutes of the second half thanks above all to two poor pieces of defending by AC Milan.

“In the first half, we gave them too much space and Milan played well and compliments to them. But in the second half, the whole stadium saw for itself the Inter mentality. We started the second half with much greater intensity, we scored four goals, we controlled possession and I’m very satisfied with this win…”

Even coach Antonio Conte was impressed with his team, notwithstanding that poor first half, saying:

“This was a very special night for us…As for the league title, it is too early to talk about that but we can at least dream about it…”

Still dreaming, too, are the other pretenders to the Juventus crown, Lazio who resumed winning ways with an impressive, dominant 1-0 away win over Parma. Lazio are immediately into a top of the table clash this coming weekend when they play host to Inter, ironically, the last side to beat them in Serie A, 1-0 last September.

Since then, Simone Inzaghi’s side has been on an 18 match unbeaten run (in Serie A), one that has broken a record previously held by the Sven Goran Eriksson side which won the 2000 scudetto. Does this bode well for the Lazio title challenge some 20 years later?

With centre forward Ciro Immobile still looking “hot” (he tops the goalscorer’s chart on 25 goals), all is still possible. What is clear is that both from their performance in the game and from the manner in which they celebrated their win, the Lazio players are still up for it. As we said, now we have a contest, a three way one.