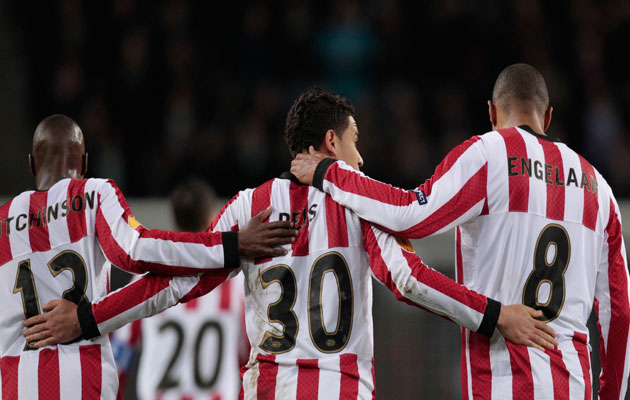 Anyone who watched Jonathan Reis star for PSV Eindhoven in the late part of 2010 would have seen a player with limitless potential soon to be plying his trade at the very top of the European game. At one time Reis was a player destined to carry on the lineage laid down by fellow Brazilians Romario and Ronaldo at the spearhead of the Brabant club’s attack. However, as is the case with so many young players, the ever-growing spotlight did Reis no favours and now at the age of just 25, his career may well be over for good.

Born in the industrial city of Contagem, Minas Gerais – just a stone’s throw from state capital Belo Horizonte – Reis was signed up by boyhood heroes Atletico Mineiro aged just 15 at a time when the ‘people’s club’ of Brazil were just recovering from relegation to the second tier of Brazilian football. His talent was obvious from day one, and by 17, he had caught the eye of European giants PSV Eindhoven.

His start at the Dutch side was positive, in the 2007 Terborg tournament, Reis helped dispatch strong Ajax and Chelsea outfits on the way to the final, before scoring twice to hand Eindhoven’s development squad a 3-2 victory over Boca Juniors. For the most part of 2007 and the early part of 2008 Reis looked every bit the emerging superstar PSV thought they had, crowned by his Champions League debut in December 2007 against Inter Milan at the Philips Stadion. Reis was to be promoted to the first team squad for the coming season, but the up and down nature of Reis’s career was about to throw in its first setback.

In March 2008, Reis broke his foot in a training session and was allowed to return home to Brazil in order to recuperate after reportedly complaining of chronic homesickness. His leave was granted, however reports soon fed back to then-manager of PSV, Huub Stevens, that Reis had chosen to remove the cast on his broken foot prematurely, causing a second injury. This one meant Reis would miss the start of the season. Stevens was furious, describing him as ‘Irresponsible and unprofessional’, as a result, Reis was demoted back to the development squad. Several theories were abound for Reis’s reckless behaviour, with the finger mainly being pointed at his agent, Vlado Lemic, whom Stevens accused of ‘leading the player astray’. However more of Reis erratic behaviour was to follow. In late 2008 he returned to Brazil unauthorised by PSV to attend his grandmother’s funeral.

Reis begged forgiveness, however Stevens remained firm in his stance and while moves elsewhere in Holland and with interest from other European clubs was hinted, Reis opted to return to Brazil again – in an authorized and footballing capacity this time – to sign with local Minas Gerais club Tupi until the end of the 2008-2009 season. Back in Brazil his career started brightly. He scored on his debut, but once again fell into the vices that had all but ruined his Eindhoven career. With Stevens himself on his way out of PSV, reports once again filtered back to the club that Reis had been revelling in his home region’s nightlife. Suddenly the comparisons to Ronaldo were looking accurate for all the wrong reasons, and by the time he did return to his parent club – five days later than he should have done under the loan agreement – once again, it seemed his European career was gone for good.

What saved Reis this time was a change of leadership. Stevens left and was replaced by Fred Rutten, who endeavoured to give the players at the club’s disposal a chance to prove themselves worthy of a place in his squad. Reis was readmitted into the PSV fold and for the early part of the 2009-10 season, it looked to a masterstroke by Rutten. Reis was on fire at the start of the campaign. He scored four goals in his first four Eredivisie games – including an outrageous side foot volley away at Roda JC – with another three in the Europa League and one in the Dutch Cup. In a PSV attack featuring Balázs Dzsudzsák, Ibrahim Afellay and Ola Toivonen all at the peak of their abilities, it was Reis’s name that was making the most noise. 2009 was to prove the most fruitful year of Reis’s career, he scored 13 goals in 26 games and soon links with Everton, Fulham and even at one time AC Milan were being made. If 2009 was Reis’s great rise, his 2010 was, arguably, to prove one of the biggest falls in footballing history.

While at a Dutch hospital for a routine checkup, reports surfaced that Reis has tested positive for cocaine. His contract was immediately terminated by PSV, with the stipulation that he could be rehired to the squad if he attended rehab. Despite initially refusing, Reis agreed to attend the facility and perhaps sympathetically – or perhaps through necessity given that their only other striking option by this point was the Swede Marcus Berg – PSV re-signed Reis to a year long contract, with an option for a further three years written in to the deal. The Dutch media appeared to get behind the striker, almost understanding of the problems faced by a young man far from home.

The faith shown in him by both club and media seemed to have paid off, with Reis netting a hattrick in a famous 10-0 win over Feyenoord, but the joy was short lived. Just 48 hours before PSV’s next game, Reis was arrested by Dutch police after being found driving at over three times the drink-drive limit. Reis’s condition was described as so bad, he couldn’t even speak coherently to the officers who had pulled him over. A fine was quickly imposed by the club, who gave him one last chance to change his ways.

Unfortunately for Reis, that decision was taken out of his hands by a horrific injury suffered in a collision with future PSV player Premaslaw Tyton in a game against Roda JC. Reis was left with a torn cruciate ligament, posterior cruciate and medial ligament, which in any other case would have been career ending. He required two operations in the US to fix the problem.

During his layoff from football, his contract with PSV expired and rather than sign a short six-month contract at the club, Reis decided to sign instead with Vitesse Arnhem, a decision that infuriated both fans of PSV and the club itself, both of whom felt he owed the club for investing time and money in him. Nearly 400 days after his last game for PSV, Reis made his Vitesse debut in a 1-0 defeat to NEC Nijmegen, but it was next appearance in a Vitesse shirt that raised headlines. Back at PSV, Reis this time came off the bench, only to be bombarded with bags of sugar by the home crowd in reference to his drug problems.

At Vitesse, he found much less patience with his off-field antics. His European career faded out with a whimper and he was released by the Arnhem club in November 2013. Returning to Brazil, he stated his desire to start again, agreeing a deal with EC Bahia. He was the subject of a great deal of media attention and, somewhat ironically, was paraded in front of the press alongside fellow new signing Freddy Adu. He remained philosophical on his previous lifestyle, saying:

“A few years ago I saw the light when a friend of mine who dealt in drugs was shot dead in front of my eyes. I was heavily addicted, depending on chemical agents. When I started at PSV, I played well. There was fame, I earned a lot of money but had no structure in my life so I could not cope. As a young player you have to be careful that success does not go to your head. You have many so-called friends, who are just after your money and nothing else. But in the end, everyone has gone to the ground.”

Once again, His career at a new club was blighted with problems. He didn’t even get to make a first team appearance for Bahia as a contract dispute raged on off the field, resulting in Reis leaving after just two weeks. Now, in the shadow of Belo Horizonte’s impressive Mineirao stadium, he plays in an amateur game with local side Brumadinho.

For Reis, the days of Champions League football are a world away from the amateur surroundings he now finds himself in. He will almost certainly never see those days again,but perhaps career of self-sabotage will serve as a warning for other young players not to fall into the same vices.