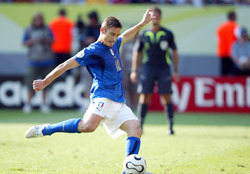 Italy are through to the World Cup quarter-finals after overcoming Australia courtesy of a penalty in the last minute of the game.

The much-vilified Francesco Totti stepped up and hammered an unstoppable penalty past Mark Schwarzer, to earn the victory for an Italian side that had been reduced to ten men early in the second half following the dismissal of Marco Materazzi.

Australia winger Harry Kewell arrived on crutches – and missed the match with a groin strain. Marco Bresciano took his place, while Luke Wilkshire came in for the suspended Brett Emerton.

Unsurprisingly, Mark Schwarzer replaced Zeljko Kalac, who had a shocker against Croatia in their final group game.

Del Piero’s first contribution to the game almost led to a goal after just three minutes. He teased the defender on the left before delivering a wonderful curling cross that Luca Toni headed just wide.

Italy went close again shortly afterwards when the ball fell to Perrotta but his goal-bound shot was well blocked by Chipperfield.

Although the match was relatively even possession-wise, Italy looked the more dangerous side and they looked a threat every time they went forward. Midway through the half Australia were grateful to Mark Schwarzer who cleared with his foot after Toni turned Grella with ease and fired in a low shot on target.

Australia’s best chance fell to Chipperfield after Italy failed to clear a free-kick. The ball fell to the advancing defender who connected cleanly with his shot, but hit it straight at Buffon.

At the other end, Toni missed his third good chance after good play by Italy. Pirlo found Perrotta who headed across the face of the goal to find Toni, but the striker, who arrived here with a reputation as a prolific goalscorer after a wonderful season with Fiorentina, headed over the bar from close range.

Lippi introduced Iaquinta at the interval for the relatively ineffective Gilardino. However, on the evidence of the opening 45 minutes, it was his partner Toni who should have been replaced. The Fiorentina forward added to his collection of bad misses just after the break when he fired over when under no pressure at all.

Spanish referee Luis Medina Cantalejo, gave Australia a huge boost five minutes into the second half when he dismissed Marco Materazzi for a crude lunge on Bresciano. Although cynical, the foul did not deny an obvious goal scoring opportunity and it was difficult to imagine why the official considered the challenge worthy of a red card.

Italy were forced to reshuffle with Barzagli coming in for the disappointing Toni. He was called into action almost immediately as Australia sensed that this was their moment. Chipperfield, nominally playing centre back, appeared in the opposition penalty area and his stinging shot was palmed away by Buffon.

Lippi also brought on Totti for the anonymous del Piero with fifteen minutes remaining, and the Roma man’s first contribution was to set up Perrotta from the edge of the area, but Neill blocked his effort. Indeed, despite playing with only ten men, Italy still looked as likely to break the deadlock as their opponents.

With the referee looking at his watch and with extra-time looking inevitable, Italy were extremely fortunate to be awared a penalty. Grosso burst into the penalty area and fell over the prostrate body of Lucas Neill. It looked an innocuous challenge but the referee had no hesitation in pointing to the penalty spot. Totti, having a World Cup to forget, stepped up and smashed home the spot-kick to redeem his somewhat tainted reputation.

It was cruel on Australia who had done enough over the course of the 90 minutes to earn an additional half an hour. Their World Cup campaign is over, and so too is Guus Hiddink’s hope of becoming the first man to reach the semi-finals with three different countries.

Italy march on, although their performance here was not one to instill fear in any of the teams remaining in the competition. However, with a match against the winner of the Switzerland-Ukraine tie to come, a place in the last four looks a distinct possibility for Lippi’s team.