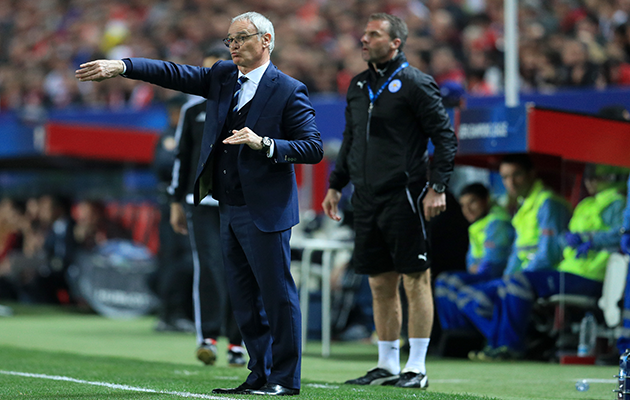 Leicester City boss Claudio Ranieri praised his side’s “big heart” after Jamie Vardy gave them a lifeline with a late goal in their 2-1 Champions League last 16 defeat at Sevilla.

The Foxes were trailing 2-0 before Vardy scored his first Champions league goal and his first goal in any competition since 10 December.

“The first half was very tough, we were a little scared, nobody wanted to show for the ball and Kasper kept the team alive, saving the penalty and some shots,” Ranieri said.

“The second half was much better and we believed we could do something good. When we played our football in our good moment they scored the second goal, but we didn’t give up and then we went back and scored a goal that was important for three things: it gave strength to us, Vardy goes back to scoring, and it reopens the match in the second leg.”

Sevilla dominated possession, missed a penalty and hit the woodwork twice, yet the English champions still have a chance of reaching the last eight. A 1-0 home win in the second leg at the King Power Stadium next month would be enough to see them through.

“We know they are better than us, a very high-quality team, a lot of experience,” Ranieri added. “But we have a very big heart, very big effort, we helped each other and I think we deserved this goal. I think we are still the underdogs because they have high quality but we will try to do our best – if we lose it’s because Sevilla made a fantastic performance.

“When we play with this character, also the luck comes on your side,” Ranieri said. “We have to continue in this way and keep going. Now we know our focus is on the Liverpool match [on Monday]. It could be a turning point, but it’s important to make another good match against Liverpool.”

Vardy, who had not scored since his hat-trick against Manchester City in December, dedicated his goal against Sevilla to Finley, his son, who was born last month.

“My celebration was for little Finley,” he said, explaining why he put a thumb to his mouth. “He’s probably asleep but that was for him. Danny Drinkwater got through and put it on a plate for me. But we worked so hard. We all gave 110%.”

The second leg at the King Power Stadium takes place on 14 March.