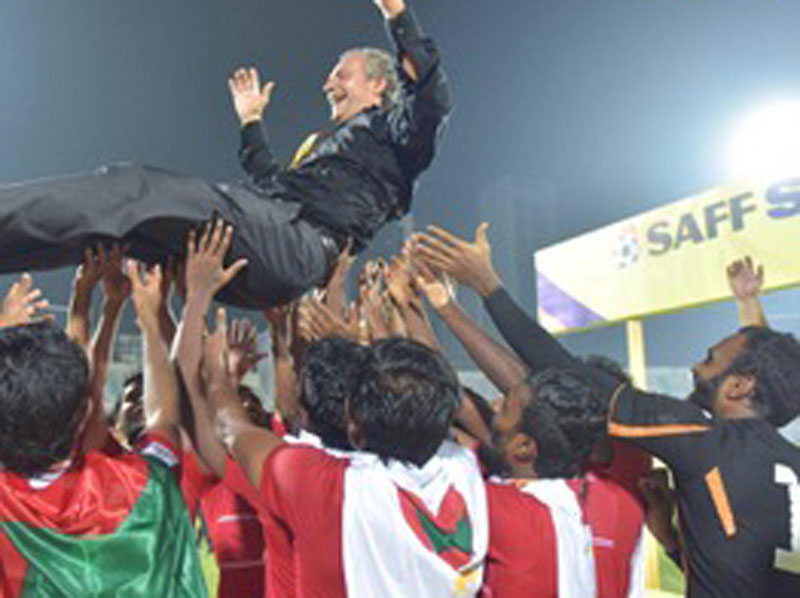 For a team missing a third of their starting XI and reliant on players from a disrupted domestic league that has barely begun, Maldives’ coach Petar Segrt is pretty content with the start of World Cup qualifying.

His side won the first of their eight matches as of a 27th minute goal from Ibrahim Hussain Mahudhee of TC Sports secured a 1-0 away win in Guam, which is 8,000-km away from the Maldives.

Segrt’s side arrived missing five players. Goalkeeper Hussain Shareef and midfielder Hussain Nihan could not get visas and two other players did not travel due to personal reasons.

The biggest loss, which put the matches in context, was the absence of promising midfielder Ibrahim Waheed, who lost five members of his family in a tragic water sports accident on the eve of departure.

“We won that game for Ibrahim, but we lost a lot of energy on that trip,” says Segrt, whose jet-lagged side returned home to face the might of China and 2006 World Cup winning coach Marcello Lippi.

The Croatian-born German says: “We would have liked to make a point but we need to be realistic. They have one of the best coaches in the world but after 30 minutes he was a little surprised as the game was still 0-0.”

China needed two second-half penalties and a 90th minute goal from naturalized Brazilian Elkeson to secure a win against a dogged Maldives in a game played in front of large travelling support.

“We are very satisfied,” says Segrt. “For players from a small country who have not trained for six months it was a big success.”

The lack of match action is a sore point for Segrt, who arrived in the Maldives last year with his assistant, former international defender Gela Shekiladze.

The duo immediately surpassed all expectations by winning the South Asian Cup for the second time with a 2-1 win over regional giants India, only for football on the Maldives to grind to a halt.

Segrt says: “After the win last year football was on a very good way. In the country there was unbelievable euphoria about football but then the liga stopped because there was some money problems.”

Apart from Maziya Sports and Recreation, the other clubs in the Dhiveni Premier League also wanted to start in June to aid their chance in AFC competitions.

The delay was perhaps no surprise in an island state, where the football was dogged by such political infighting a few years ago that FIFA sent a normalisation committee to run the game in 2014.

Although veteran striker Ali Ashfaq has played in Brunei and Malaysia, he is back in the Maldives with the rest of Segrt’s squad, who were left kicking their heels due to the delayed start.

The league is played on the main island of Male and has a limit of four foreign players, who are full-time. As most clubs fill their quota, this draws in players from across the world. Most sign one-year contracts then move after a season to another club offering a better deal.

“Of course Europe is better, but the standard is good; not the best but getting better,” says Cornelius Stewart, a St Vincentian international midfielder, who has been in the Maldives for three seasons and now plays for Maziya after initially joining TC Sports.

The football tournament at the 2019 Indian Ocean Games in Mauritius came only a month after the belated league kick-off. To give game time to rusty young players on the fringes of the national team, Segrt and Shekiladze took a side of U23 players and lost all three games.“With only four days preparation for this tournament it was too short time,” says Segrt.

Before the World Cup qualifiers, Segrt was able to take his team on a training camp in Colombo and despite the withdrawals and jet lag is happy with three points from two games.

After being edged out 2-1 by Syria in October, Guam and the Philippines coming to the Rasmee Dhandu Stadium in Male in November and Segrt is hoping for more points back as his side try to sneak into second spot in Group A.