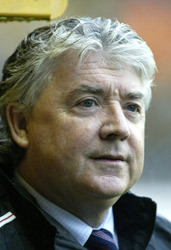 Liverpool move two points off leaders Man Utd after beating Chelsea 2-0, but the Red Devils still have a game in hand. See all the BestPrice title odds here.

Charles N’Zogbia has claimed that managing Newcastle is beyond manager Magpies boss Joe Kinnear, who has responded by saying the player lives in a “fantasy world”.

Midfielder N’Zogbia, who left the club to join Wigan during the transfer window, said: “Newcastle needs someone to control the club properly.”

But Kinnear responded: “His comments are laughable really.

“He lives in a fantasy world. In the end there was only one thing I could do – send him to Wigan.

“There was not a day when he didn’t have some Mickey Mouse story about a club that wanted him,” added Kinnear.

“First it was Arsenal, then Manchester United, then Real Madrid, then Aston Villa and Lyon.

“I think he needed bringing down to earth and I can assure you nobody tried to stop him going.”

Last week Kinnear upset N’Zogbia when he referred to him as “Charles Insomnia” during an interview.

The 22-year-old Frenchman reacted by refusing to play for Kinnear again – and he subsequently left St James’ Park in a £6m transfer to the Latics.

“When you hear the manager say something like this about you, then you know he doesn’t respect you,” said N’Zogbia.

“If he doesn’t respect you, what’s the point of playing for him?

“I wasn’t happy playing at Newcastle, there was no conversation with the manager. I was playing but when you are young, you need somebody to tell you what to do.

“When there is no conversation you want to move on.”

However, Kinnear claims N’Zogbia was always trying to engineer a move, and has questioned the integrity of the player.

Liverpool move two points off leaders Man Utd after beating Chelsea 2-0, but the Red Devils still have a game in hand. See all the BestPrice title odds here.