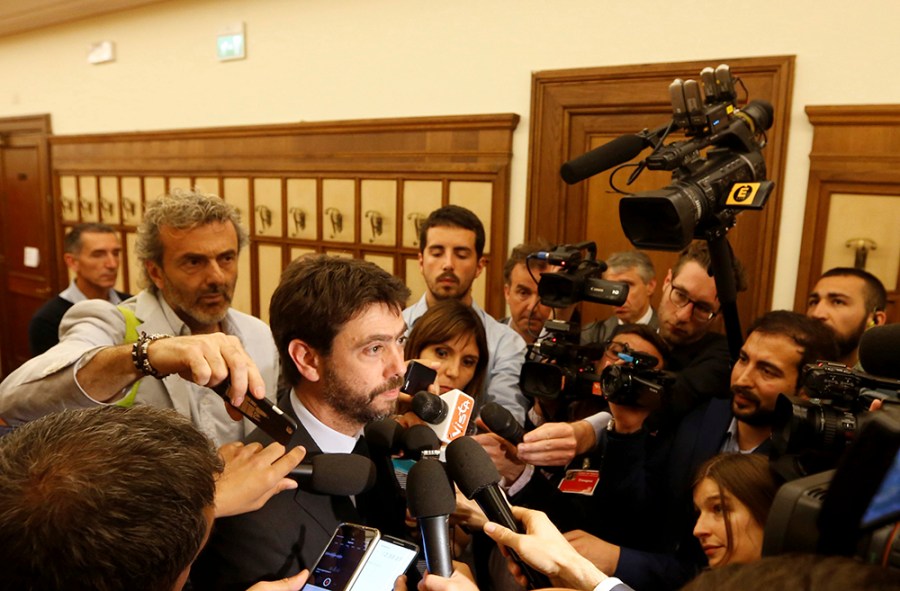 Juventus president Andrea Agnelli on Monday received a one-year ban and a €300,000 fine for his role in selling match tickets to “ultra” fans, allegedly connected to organised crime. The ruling was handed down by the Football Federation’s Disciplinary Court which had prepared a case against Mr. Agnelli and three other club officials on the basis of evidence gathered by Turin-based public prosecutors who had been investigating mafia infiltration in the Piedmont region.

Juventus immediately said that they would appeal the ruling “in the firm belief that the club is in the right”. Mr. Agnelli has always strongly denied any wrongdoing, arguing that the fans with whom he had met were not involved in criminal activity, while there had been nothing clandestine about his meeting with them.

The Juventus statement also added: “Despite the lengthy bans inflicted on the president and the other individuals involved, the club is nonetheless satisfied that today’s ruling, ‘after a careful examination of the evidence obtained’ [page 11 of the ruling], completely rules out all possible links with organised crime.

“Juventus Football Club has faith in the sporting justice system and would like to once again stress that the club has always cooperated fully with the authorities in the interests of safety and public order.”

The Federation prosecutor, Giuseppe Pecoraro, has also said that he will appeal the ruling, arguing that the sanctions are too lenient, adding:

“I think the judgment of another court would be useful, taking into account that the resources coming from the ticket touting went to a criminal organisation, and that is a very serious matter.”

This not unexpected ruling comes less than a month after Mr. Agnelli was appointed the new chairman of the European Club Association (ECA), succeeding Karl-Heinz Rummenigge. It remains unclear how, if at all, Mr. Agnelli’s role at the ECA will be affected by his suspension, which essentially applies to Juventus-related duties.

As for football on the field, it is worth pointing out that this  judgement has come at the start of a delicate week for the Old Lady, a week dominated above all by her Champions League home tie with Greek side, Oympiakos.    Given that traumatic 3-0 drubbing by Messi and friends at the Camp Nou in their opening tie two weeks ago, Juventus badly need to get their show back on the road.

That reverse aside, Juventus have made a more than satisfactory start to the season, winning six out of six to remain joint top of Serie A with an equally successful Napoli. They warmed up for the Olympiakos tie in the best possible manner with an emphatic 4-0 win over city rivals Torino in an unsually onesided Turin derby on Saturday night.

In truth, this derby lasted just 24 minutes. By that stage, hapless Torino were both a man and a goal down and were clearly going nowhere.  The derby could hardly have started less promisingly for Torino. After just 16 minutes, Torino’s Venezuelan midfielder Tomas Rincon was dispossessed in midfield by Paulo Dybala. These days, the little Argentine needs no such helping hand.   Gifted a free run on the Torino area, he made immediate progress before finishing off with a  superbly struck left foot shot. One-nil and already Torino were in trouble.

Turin’s “other” team went into this game with a dismal record in recent derbies, having won only one of the last 22. Quarter hour gone and it was looking like one of the last 23.  Eight minutes later that sensation was definitively confirmed when Torino’s useful midfielder, Daniele Baselli was sent off after he earned himself a deserved second yellow card when chopping down Bosnian Miralem Pjanic with a tackle that owed more to Kung Fu than to Association Football.

Just to finish off the Torino misery, the same Pjanic scored a peach of a goal just before half time to wrap up the match. Inevitably, there was no real contest in the second half as an outnumbered, outclassed and demoralised Torino got run over by Juventus. Goals from Alex Sandro and from Dybala finished off the scoring in a second half when former PSG goalkeeper Salavtore Sirigu was easily his side’s best player, saving at least three other point blank “certain” goals.

Two consideration emerge from this game. Firstly, Paulo Dybala is clearly in the form of his life. After six games, he is top of the Serie A goalscorers’ chart on 10 goals. By comparison, last year he scored 11 over the arc of the entire season.  It only remains for Dybala to transport that form into European competition, starting against Olympiakos on Wednesday night.

The second consideration concerns ace marksman, Argentinian Gonzalo Higuain.   Not yet either fully match fit nor in his sharpest form, Higuain was dropped for the Derby being brought on only for the last ten minutes. In his absence, Croat Mario Mandzukic played centre forward and to great effect, too, creating plenty of space for Brazilian Douglas Costa on the left flank and Colombian Juan Cuadrado on the right.

There is no question of a long term Higuain “crisis” but  his current form may tempt coach “Max” Allegri to use the Mandzukic alternative more often, perhaps even against Olympiakos.  Higuain aside, Juve will be at close to full strength on Wednesday night for a game they simply have to win.