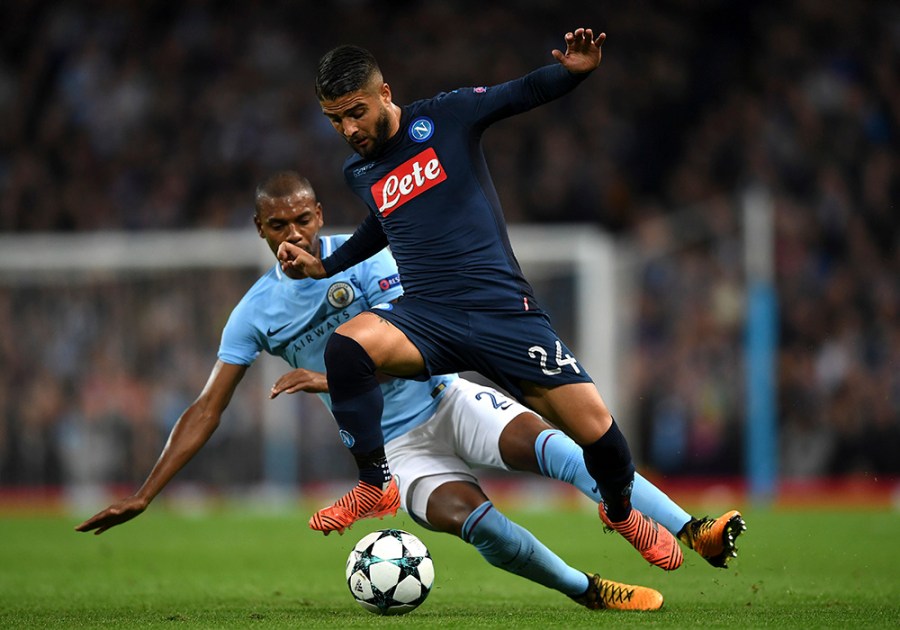 As the Champions League moves centre stage again this weekend, it is intriguing to note that of the three Italian clubs involved, it is the league leaders Napoli who may well have most to do to play their way into the second round. In their homeland, Napoli can do no wrong, having won 10 of their 11 Serie A games this season, drawing the other (10 days ago to Inter).
Not only have they picked up the results but Napoli have done it playing arguably the most attractive and efficient football in the land. Yet, when it comes to the Champions League, results do not compare. Napoli have already lost two of their opening three Group F  games, away to Ukraine side Shakhtar Donetsk and to Manchester City respectively.
Napoli probably need a “result” against Man City, given that they currently sit third in the group on three points, three behind second-placed Shakhtar and six behind City. The problem here is, that for all their domestic fireworks, Napoli appeared totally overwhelmed by City – at least for the first half hour –  in that 2-1 defeat  in Manchester two weeks ago.
This was another of those occasions when, for whatever reason, Napoli seemed strangely lacking in self-belief in the face of an admittedly whirlwind Man City opening salvo. That was the bad news, a performance that brought to mind Napoli’s all too timid 3-1 away loss to Real Madrid in that second round Champions League tie last February.
There was good news, however, and it came in the shape of a much more convincing second half Napoli performance. When Man City manager Pep Guardiola told the media that Napoli were “one of the best teams I have ever played against”, he might perhaps have been using a mix of poetic licence and diplomatic respect for a defeated opponent. What was true, however, was that Napoli recovered from a nightmare start to regain their composure, their positioning and their usual slick, first touch football, in the process making a game of it.
That is the point from where Napoli need to start off on Wednesday night at the San Paolo. Ah yes, the San Paolo… and there, of course, is arguably Napoli’s strongest card. Noisy, passionate and potentially intimidating home support has always been the hallmark of the San Paolo, well worth a point or three.
Allied to that, Napoli have continued on their all-impressive winning way, notwithstanding that painful evening at the Etihad Stadium. Such was their dominance of Sassuolo in a 3-1 win on Sunday that the first half statistics show that Napoli had a staggering 76 per cent dominance of possession. That, most obviously, will not happen against Man City but it does mean that, like the Premier League leaders, (3-2 away winners against West Bromwich Albion on Saturday), Napoli go into this one in excellent form.
As much as Napoli’s away defeat by Man City was disappointing, Roma’s 3-3 away draw with English champions Chelsea in the same week came as a welcome surprise. With the memories of at least two Champions League debacles, those 7-1 drubbings by both Manchester United and Bayern Munich, always in the mind, a Roma away fixture against the English champions inevitably provokes some quiet alarm. We need not have worried as Roma went on to give probably their best performance of the season so far.
As Roma put point after point in the bag, then a solid, serious team emerges match after match. Beaten twice in the league this season, unluckily by Inter and deservedly by Napoli, Roma might have expected to struggle in this group but they go into Tuesday night’s return leg against Chelsea in the relatively strong position of being three points clear of second placed Atletico Madrid. At the beginning of this season, your correspondent suggested that Roma’s most significant signing of the summer had been, not a player, but rather coach Eusebio Di Francesco. More and more, that looks to be the case.
Winners of their last three league games, Roma go into this tie very much on form. History, too, might just be on Roma’s side. The last time that these two met in the  Champions League, Roma had the better of November 2008 group encounter winning 3-1 at the Olimpico. Mind you, not that that win did Roma much good because they went out in the second round to Arsenal whilst Chelsea went all the way to the semi-final where they were cruelly denied by a stoppage time goal from Barcelona’s Andres Iniesta, missing out on what would have been another all Premiership final against Manchester United.
With a home game against Azebaijan team Qarabag still to play, Roma may well fancy their chances of making it into the second round. However, given that they still have to face Atletico in Madrid, a “result” in Rome, even a repeat of the first leg draw, would go down very nicely indeed.
Which leaves us with the Old Lady herself.  Second to Barcelona in Group D, Juventus gave arguably their most impressive performance of their Serie A season so far when defeating Milan 2-0 at the San Siro on Saturday night. The most ominous aspect of that win was that the outrageous skills of Argentinian striker Gonzalo Higuain, scorer of both goals, proved to be the major difference between the two teams.
Slow to get started this year, as indeed he was last season, Higuain is beginning to look distinctly dangerous. Sporting Lisbon (and Barcelona) beware…