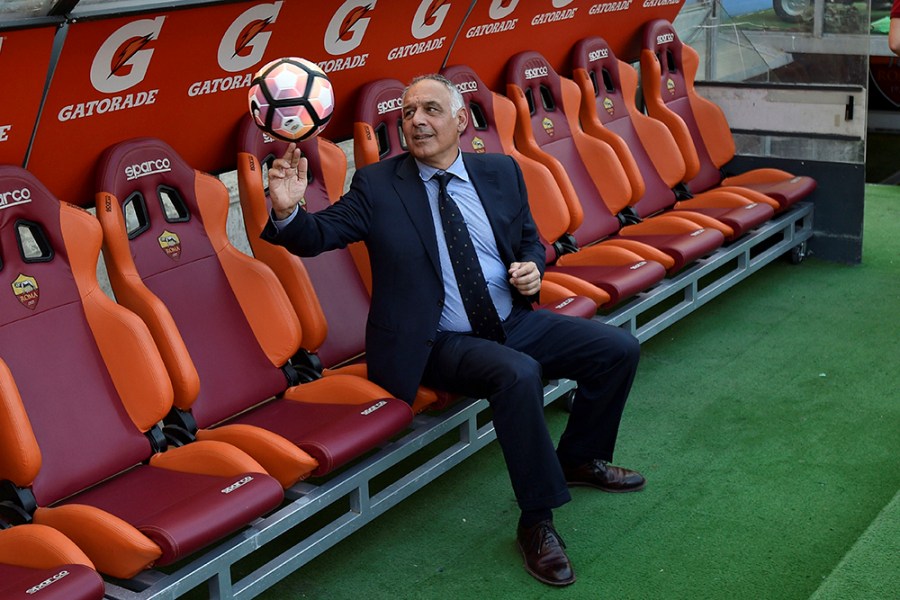 The start up of the Serie A season is now just 18 days away with, fittingly enough, reigning champions, Old Lady Juventus, due to raise the seasonal curtain with an opening home game against Cagliari. As we come down to the wire, there seems to be just a little bumping and boring as rival candidates jockey for position at the “Off”.

How else does one explain the comments last week of Roma’s Boston-based president, James Pallotta. Speaking on the occasion of Roma’s pre-season US tour which saw Roma lose (on penalties) to PSG and to Juventus, as well as win against Tottenham, Mr. Pallotta had a whole heap of interesting things to say.

Most controversially, he dared to publicly ask a question which, privately, many have been pondering. Namely, can Chinese-owned rivals Milan really afford their €210 million dollar plus, transfer splurge of this summer?

Pallotta seemed to have doubts about just how UEFA have put a financial fair play investigation into Milan’s books on hold until October, telling Reuters: “I’m so upset at UEFA. It’s a joke, it’s crazy.  It makes no sense.  They [Milan] don’t have the money.

Furthermore, Pallotta pointed out how the U.S. private equity fund, Elliott, had provided backing to the Chinese-led consortium which bought Milan from ex- Prime Minister Silvio Berlusconi for approx. €740 million last April, adding: “[Elliott CEO Paul Singer] is a friend of mine… They’re going to own the team. They have the debt.”

Inevitably, there was an immediate response from Milan with CEO Marco Fassone commenting: “First of all, there is a question of style.  It is most unusual, at least in Italy, that one club so directly attacks a rival club. On top of that there are a lot of mistakes (made by Pallotta). An operation of this size is usually done thanks to financial leverage. The Elliott fund is responsible for €180 million whilst the club itself is valued at €740 million…

Mr. Pallotta, however, did not restrict himself to observations about Milan.   Speaking of Roma’s plans to build a state of the art new stadium at Tor Di Valle, Rome, Mr. Pallotta indicated that his patience might just be wearing a bit thin when it comes to dealing with the huge bureaucratic and political obstacles encountered by this ambitious project, saying: “We don’t want to sell it [Roma].  We think there’s a huge opportunity for us to build a championship-calibre team with a stadium and an entertainment complex… But if they can’t get the approval stuff in order then someone else is going to have to go through with it.”

For the record, Pallotta first unveiled his stadium plans to then Mayor Ignazio Marino in March 2014. Three years later, the work has still to begin.

Speaking of his former coach at Roma, namely Luciano Spalletti, now at Internazionale, Pallotta accused him of being fixated with media reaction and comment, saying: “Luciano used to over-think it. I would go into his office and say, ‘Luciano, how are you today?’ And then I would walk out and he would ask somebody, ‘What do you think he meant by that?… I loved the guy but the media could drive him crazy… He would just fight them.”

Pallotta also admitted to some amusement at the fact that two of his former employees, coach Spalletti and team manager Walter Sabatini, have now both moved on to work with Inter. Talking to Corriere Dello Sport, Pallotta recalled: “When we engaged Spalletti [January 2016], Walter was totally opposed to the idea. I find it really great that the two of them are back again together, side by side…”

All in all, one begins to suspect that when Roma come face to face in Serie A this season with the two Milan sides, (Roma v Inter, 26th August and Milan v Roma, 1st October), no love will be lost in two games that might just have a little extra “needle” about them.