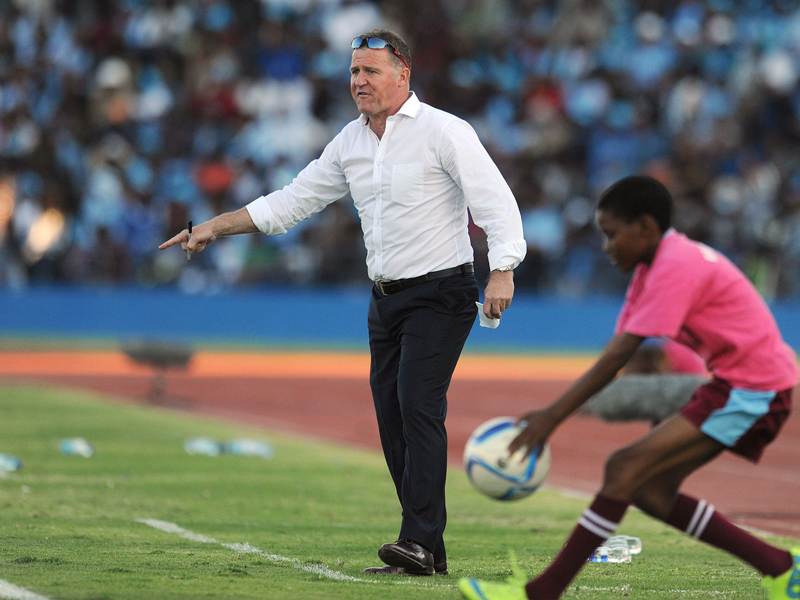 Peter Butler did not expect to be training Africa’s greatest player or the national president when he took the Liberia job – and certainly not at the same time.

George Weah led the Lone Stars to two Afcon appearances in 1996 and 2002 before a bitter civil war engulfed Liberia.

The first and so far only African player to win the FIFA World Player of the Year and Ballon d’Or awards, Weah has been Liberia’s president since January 2018 but takes a keen interest in football and sometimes trains with Butler’s team.

The sessions are mainly to boost Weah’s profile, but Butler says the former Milan and PSG star is “very supportive”.

After a playing career as a midfielder in England at clubs including Southend and West Ham, the Yorkshireman moved into coaching nearly two decades ago, mainly in Asia before taking charge of Botswana in 2014.

Butler revitalised Botswana but resigned in 2017 and returned to club work in Asia. The lure of working at international level remained and he spoke to the Sierra Leone federation, but opted for Liberia. Taking charge in August, Butler was thrown into the deep end with two-legged World Cup qualifiers against … Sierra Leone.

A 3-1 win at gave Liberia a defendable advantage in the return. Despite losing 1-0, Liberia progressed to the group stage only to be then knocked out of the 2021 Afcon preliminaries by Gambia. Butler hopes his decision to stay in Liberia throughout his stay will endear him to his new employers.

“I’m here for a year with an option for another year but you can’t do any planning with a year’s contract,” says Butler. “I’ve hit the ground running and been coaching constantly since I’ve been here.

“I want to bring the average age down, get rid of the dead wood and bring on the up and coming players. So even if I’m only here a year, then I’ve laid some foundations.”

Butler can call on Newcastle United’s Mohammed Sangare and Sam Johnson from MLS side Real Salt Lake. Both scored against Sierra Leone but the real star was teenage goalkeeper Ashley Williams.

Leading 1-0 in the return in Freetown, Sierra Leone were awarded an injury time penalty that would have clinched qualification but Williams foiled Umaru Bangura to take Liberia into the group stages.

The 19-year old plays for LISCR in the domestic Premier League, which started on October 27. The 12-team league is mainly restricted to Monrovia due to safety concerns, which helps Butler keep an eye on local talent.

“It’s a very difficult country to operate in,” says Butler. “There’s not a lot of money here. The players in the local league do get paid but not much. It’s more about an opportunity to show what they can do, a showcase.”

“I’ve watched more games here than at any other time in my career. It’s important to understand what we have in our local leagues.”

He adds: “Williams has all the attributes to be an outstanding African footballer, but he desperately needs to go to Europe. It’s OK bringing people here but we don’t have the facilities. We have to be pragmatic.”

That pragmatism extends to keeping an eye on the diaspora, which was scattered by a civil war that killed a quarter of a million Liberians. Tracking the exiles down is not easy.

“The country was ravaged; it’s tragic what these people have been through,” says Butler. “To get over that takes a long time, you don’t just lose a few players, you lose a generation and it will take many years to get back to where they were in the 1990s.”

Butler’s biggest target is Athletic Bilbao striker Inaki Williams, who was born in Spain to a mother that had fled the civil war. Williams’ solitary cap for Spain was in a friendly back in 2015 so he is eligible to play for Liberia.

“We are still trying but he’s got aspirations of playing for Spain,” says Butler. “If he hasn’t played for Spain at 25, is he going to now?”

Another lower profile target is teenage defender Mark Pabai, who was born in the Netherlands but has Liberian parentage and signed his first professional contract with Utrecht in January 2019.

Bringing both into the squad for the World Cup qualifiers is an aim for Butler, but so is providing game time for Liberia’s youngsters.