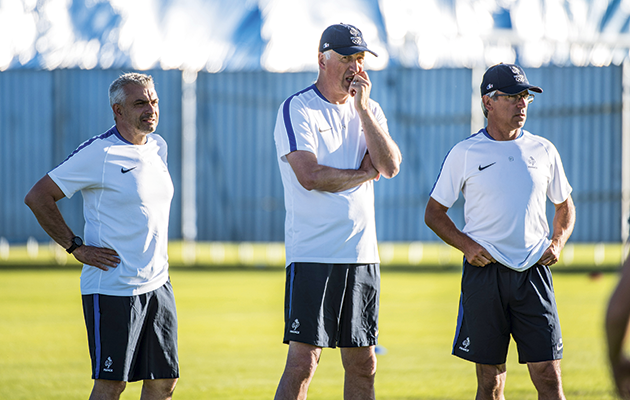 A major tournament is usually followed by coaching changes and player retirements, and Rio 2016 Olympics was no exception.

But while the managerial transition in Germany – from Silvia Neid, who bowed out after completing her collection of honours with Olympic gold, to Steffi Jones – was trailed long ago, the departure of France’s Philippe Bergeroo was a brutally swift affair, with the coach fired and replaced within a day.

Bergeroo had three years at the helm, during which France often played attractive football only to run out of steam in matches and tournaments as honours continue to elude a team that has yet to reach a major Final. The under-19s may have won four European tournaments, but at senior level the team falter. Semi-finalists under Bruno Bini at the 2011 World Cup and 2012 Olympics, they fell at the quarter-finals in all three major tournaments under Bergeroo. He would likely have been fired anyway, but publicly criticising the players’ mental strength after the Olympics sealed his exit, even if many feel he had a point.

His replacement, on a two-year deal, is Olivier Echouafni. The contract length reflects inevitable doubts about a man who has no experience of the women’s game and whose main attraction appeared to be his availability. His management record extends to two brief spells in the men’s game with Amiens and Sochaux – who sacked him after a poor start to the 2015-16 Ligue 2 season. The 44-year-old previously played for Marseille, Nice, Strasbourg and Rennes (where he played under Bergeroo).

The length of the contract is also odd given France’s main focus is three years away when they host the 2019 World
Cup. However, in less than 12 months they compete in the European Championship. What will the French federation do if Les Bleus perform poorly in Holland? Find another coach?

The scale of Echouafni’s task will be made clear on November 8 when the draw for the finals is made in Rotterdam. Sixteen teams, including five debutant nations, will be represented in the Netherlands next summer.

In an indication of the growing strength of the women’s game, this will be the first 16-team European finals; an expansion that has the benefit of facilitating the classic format of two nations qualifying from each of four groups followed by a knockout phase.

France are seeded, along with the hosts and defending champions (and new Olympic gold medalists) Germany and England. Olympic runners-up Sweden are in the second pot along with the best of the debutants, Switzerland, plus Norway and Spain. The other debutants are Scotland, Belgium, Austria and Portugal.

In the finals, which run from July 16 to August 6, Echouafni will have to do without the brilliant Louisa Cadamuro (nee Necib), who is giving up the professional game to start a family, and Sabrina Delannoy, who quit international football almost as soon as he was appointed.

Also retiring from international football are Germany’s captain Saskia Bartusiak, though she will continue to play for Frankfurt, and US veteran Heather O’Reilly. Brazil midfielder Formiga, who belied her 38 years with a personally impressive Olympics, will also call it a day at the end of the year.

There have also been some notable transfers, with Scotland’s Kim Little agreeing a return to Arsenal after three largely successful years with Seattle Reign, and Olympic gold medallist Anja Mittag leaving Paris Saint-Germain for Wolfsburg.
Such is the depth of talent at Wolfsburg, Mittag appeared only as a substitute in both legs of the German club’s defeat of Chelsea in the UEFA Women’s Champions League round of 32, in which Hungary’s Zsanett Jakabfi scored a first-leg hat-trick at Stamford Bridge. The 4-1 aggregate scoreline was a repeat of that between the teams last season and raised a question as to how it is the FA WSL champions are unseeded when England are fourth in the women’s club coefficient rankings? The answer is clubs are seeded primarily on their own past performances, and Chelsea are relatively new to the elite.

Making their European bow, the new English title-winners, Manchester City, did well to reach the last 16 with an impressive 6-0 aggregate win over former finalists Zvezda of Russia.

Unseeded City were rewarded with a decent draw against Brondby of Denmark. Elsewhere the big guns were all kept apart, partly due to seeding, partly due to luck. Holders Lyon face Zurich, last-year’s runners-up Wolfsburg meet Eskilstuna United of Sweden, Bayern Munich were drawn with Russia’s Rossiyanka, who qualified via an injury-time goal against SFK 2000 Sarajevo, and Rosengard play Slavia Prague. In addition PSG, who needed a Cristiane hat-trick to overcome a 3-1 first-leg deficit against Norway’s LSK Kvinner, were paired with BIIK-Kazygurt, the first club from Kazakhstan to get this far. Spanish champions Athletic Bilbao went out to Denmark’s Fortuna Hjorring, who now meet Brescia, but Barcelona survive and will face Twente.

On the domestic front, with the summer leagues drawing to a close, Linkopings secured the Swedish title, PK-35 Vantaa are champions of Finland and Rossiyanka regained the Russian championship.