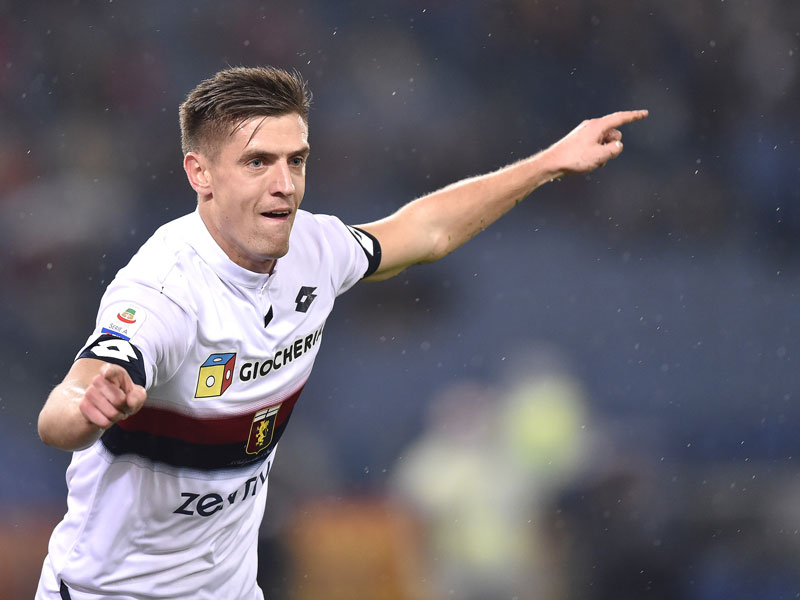 Paddy Agnew’s Notes From Italy: The Rise Of Krzysztof Piatek

Amidst the hype generated by Gonzalo Higuain’s move this week from AC Milan to Chelsea, foreign observers have probably paid little attention to the player Milan intend to sign as the Argentine’s replacement, namely 23-year-old Polish striker Krzysztof Piatek.

Yet, Piatek (pronounced “Piontek”) is a player more than worthy of attention, if only because of his meteoric six month rise from the relative obscurity of Polish first division side KS Cracovia to Serie A giants AC Milan. The least you can say about this guy is that it did not take him long to make his mark.

Relatively unnoticed by many during two seasons from 2016 to 2018 with Cracovia, Piatek did not escape the eagle eye of agent, Gabriele Giuffrida, who alerted Genoa boss Enrico Preziosi. When he was bought last June for a reported €4 million, most of the Genoa fans had almost certainly never heard of him.

He had scored 21 goals in his final season with Cracovia, but Poland’s oldest club flies well below the European competition radar these days so he was not exactly a household name on the coast of Liguria. Within 17 minutes of his Genoa debut in an August Cup tie against Lecce, however, the fans were most certainly sitting up and taking notice.

17 minutes was all it took him to score his first three goals in Italian soccer. By halftime, he had made it four – game over. Nor did the remarkable initial Piatek run stop there. A few days later, he made his Serie A debut, against Empoli, scoring his side’s first goal after just six minutes in a 2-1 win.

For the next few weeks, a regular feature of the weekend news round-up concerned the latest record that “Il Pistolero” (The gunslinger) had broken. When he scored against Lazio he became the first player since Andriy Shevchenko in 1999 to score five goals in his first four Serie A appearances.

When he scored again in Genoa’s next game, a 2-0 win against Chievo, he had already reached the 10 goal mark in all competitions. Two goals in three minutes in a 2-1 win against Frosinone made it eight goals in six Serie A matches, the best start by a debutant since the 1949-50 season.

In his next match, a 3-1 defeat by Parma, he became the first player since the great Argentine Gabriel Batistuta in 1994–95 to score in each of his first seven Serie A appearances.

From day three straight through to Christmas, Piatek topped the goalscorers’ chart showing a clean pair of studs to Juve’s Cristiano Ronaldo among others. As of the restart of Serie A last weekend, Piatek is fourth on the chart on 13 goals, just one behind the three current joint leaders, Ronaldo, Fabio Quagliarella of Sampdoria and Duvan Zapata of Atalanta.

The quantum leap from the relative obscurity of Cracovia to the top of the Serie A goalscorers’ chart was dramatic enough. Yet, Piatek is about to make a second, equally big jump by moving to one of the traditional power houses of Italian football. In the last six months, his market value has increased tenfold, from €4 million euro in June to an expected €40 million euro this week, the price reportedly agreed by Genoa and AC Milan.

Inevitably dubbed the new Lewandowski by many, Piatek will have to be that good, if not even better, to deliver the goalscoring goods required by AC Milan. Higuain is merely the eighth, shortlived Milan striker of the last six seasons, eight in a list that includes Brazilian Pato, Alessandro Matri, Spaniard Torres, Mattia Destro, Brazilian Luiz Adriano, Gianluca Lapadula and Portugal’s André Silva.

Back in fourth position following Monday night’s 2-0 defeat of Genoa, no less, the pressure on Milan and coach Gennaro Gattuso to hold onto that Champions League spot is obviously huge. Incidentally, Piatek did not play on Monday night, not for transfer reasons but because he was suspended.

You would have to imagine that, for Piatek, the hardest task is about to begin. It was one thing to arrive at mid-table Genoa as an unknown young Pole, yet it will be quite another matter to take over at AC Milan where fan patience may not last long if the goals do not come. On top of that, the disappointment prompted by Higuain’s “walkout” means that sympathy and empathy for another foreigner will be thin on the ground.

However, as we head into another new year, Piatek represents an intriuguing conundrum. Will he end up playing second fiddle to Patrick Cutrone, the revelation of this Milan season, or will he rise to the challenge and establish himself as a key feature in his new team? If he proves anything as successful with Milan as he was for the last six months at Genoa, then we are in for some fireworks. Watch this space.