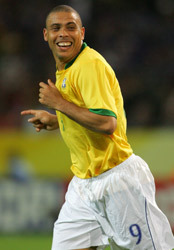 Brazilian striker Ronaldo has revealed that patience was the key after his brace helped his country to a 4-1 win over Japan to set up a second-round tie against Ghana on Tuesday.

The forward was criticised after Brazil’s first two games but he has now joined Gerd Muller as the highest scorer in World Cup history on Thursday with a tally of 14.

“I’m happy I’ve made such a significant improvement, physically and technically, during the competition,” he said.

“Patience is the key word. I managed to stay calm and patient.”

“I have complete knowledge of my possibilities, of my condition,” Ronaldo added.

“I knew I arrived at a level below my teammates, and that I would have to work really hard to reach them.

“I’m very happy with my performance, with the two goals and with Brazil’s victory. Now it’s time to rest and think about the round of 16.”

The 29-year-old got off the mark on the stroke of half-time with a header to cancel out Keiji Tamada’s earlier effort for Japan. That effort took him ahead of Pele as Brazil’s all-time leading scorer at the World Cup finals.

And Ronaldo’s second goal, which saw him curl the ball past Yoshikatsu Kawaguchi in the Japanese goalmouth, brought him level with Muller on 14 goals.

Despite the player’s timely return to form, Brazilian coach Carlos Alberto Parreira said he was still some way short of his best form.

“Ronaldo is not in the best possible physical shape but step by step and little by little he is getting there,” said Parreira.

“I’m sure he will be better as each game goes.”

“We believe he’s special. We must have confidence in our football and today we played more like Brazilians, we kept the ball for longer periods.”