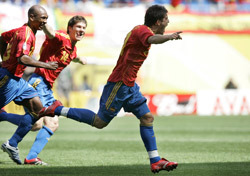 Spain opened their World Cup campaign with an emphatic 4-0 win over Ukraine in Leipzig.

It was the biggest win so far at this year’s tournament and also the most convincing performance to date, with a vibrant Spanish side completely overwhelming a disappointing Ukraine team who were making their World Cup debut.

As expected coach Luis Aragones dropped talismanic skipper Raul from his starting line-up which meant that Spain began with a new look strike partnership of Fernando Torres and David Villa.

Ukraine coach Oleh Blokhin took a gamble on the fitness of star striker Andrii Shevchenko, who had played just 30 minutes football in the build-up to this match.

After dominating the early possession Spain took a deserved lead on 12 minutes when Xabi Alsono got his head to a corner and the ball was deflected into the net off a Ukrainian defender.

Villa doubled the lead five minutes later when he his deflected free-kick from the edge of the area, wrong-footed Ukrainian keeper Shovkovskiy.

The World Cup new boys looked shell-shocked. They had done little wrong but within 17 minutes, trailed by two goals.

However, buoyed by their two-goal lead, Spain began to play with a swagger and with Torres and Villa working hard to get behind the Ukrainian defence, more goals looked likely.

Ukraine were taking time to find their feet and Shevchenko, who was not moving that freely, looked anonymous in the early stages. Their best move in the opening half hour saw Gusin shoot weakly at Casillas, but other than that minor scare the Real Madrid keeper was so underemployed that he may as well have been watching the game from he stands.

Meanwhile, at the other end, Villa could, and perhaps should have added a third shortly before half time, but the Valencia striker scuffed his shot from close range.

Ukraine will have been relieved to hear the half-time whistle as it afforded them the opportunity to regroup after a harrowing introduction to World Cup football. Blokhin made two changes at the interval, bringing on Shelayev and Vorobey for the disappointing Gusev and Gusin.

However, things went from bad to worse for Blokhin’s team in the opening minute of the second period when Vashchuk was sent off for bringing down Torres in the penalty area. Subsequent television replays showed that there had been minimal contact but that was of little consolation to the departed defender. Villa tucked away the resulting penalty despite a valiant effort from Shovkovskiy.

With the win looking assured Aragones opted to rest Villa and Alonso, introducing Raul and Albelda just ten minutes into the second half. The Real Madrid striker could have scored with his first touch, but his effort was easily saved by Shovkovskiy.

At the other end Voronin produced Ukraine’s best effort of the game but his dipping volley flashed inches wide. Substitute Rebrov squandered another good chance with 20 minutes remaining, when he cleared the bar from close range.

With Spain in control Spain and the game drifting to its conclusion, Arsenal midfielder Cesc Fabregas was introduced to become the youngest ever player for Spain at a World Cup finals.

Spain saved their best until last with Torres firing home a wonderful goal after a marvellous run by Carlos Puyol.

It was a hugely impressive performance by Spain. But, it should not be forgotten that they have flattered to deceive on a number of occasions in the past. Expectations have been raised though and it will be interesting to see how Spain now cope with the pressure of being one of the favourites to win the competition.

It was a baptism of fire for Ukraine, but in a relatively easy group that also includes Saudi Arabia and Tunisia, this result should not be terminal to their chances of reaching the knockout stages.