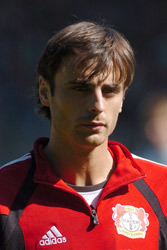 The player has agreed personal terms and will sign on 1 July, subject to being granted a work permit.

Berbatov, 25, told Spurs’ website: “Tottenham is a club that is building something special.

“The squad has some terrific young players, an excellent manager and coaching staff and I am looking forward to playing my part.”

Tottenham have agreed a fee of £10.9m for the former CSKA Sofia forward.

Berbatov was the second highest scorer in the Bundesliga with 21 goals in 34 games this season and has been a prolific scorer for his country since making his debut as an 18-year-old in 1999.

Spurs have beaten off stiff competition for a striker named Bulgarian Player of the Year in 2002, 2004 and 2005.

Spurs’ sporting director Damien Comolli added: “There were a number of clubs interested in signing Dimitar, clubs from France, Spain and the Premiership.

“We are delighted he has chosen to join us. He is a tall, skilful, highly-talented striker who not only has a proven track record of being able to finish, but also of creating scoring opportunities for team-mates.

The arrival of Berbatov casts doubt over the future of Egyptian striker Mido, who is coming towards the end of his loan stay at Spurs.

Spurs have failed to agree a fee with his club Roma and the arrival of Berbatov suggests a deal is now unlikely.